China didn't advance past the quarterfinals in the 2015 Women's World Cup, but its 1-0 loss to the United States on Friday was the third most-watched women's soccer match on record.

The June 26 game in Ottawa, Canada, attracted 5.7 million viewers on Fox, according to Nielsen.

Veteran Carli Lloyd's downward header of a high, arcing pass was the game's only goal. Lloyd's redirection came in the 51st minute from inside the box, and bounced once past the left side of China goalkeeper Wang Fei, who otherwise had an outstanding game.

China's deepest run in the tournament was the loss in the 1999 final, but the "Steel Roses" haven't been past the quarterfinals since. "Both teams played well today, and I want to commend my players for their hard work," China Coach Hao Wei was quoted on FIFA's website after the game. "We lost because of me, the coach, and there are lots of factors; I didn't do well in tactics (selection).

"The first lesson we learned is how to train ourselves to be affected by what happens in the stands and on the field," he said. "Our team did an excellent job in Canada, and I hope we can carry on the great work and continue to grow the game in China. Our girls did their best. My goal entering the tournament was to make it to the semifinals, and we didn't - I'm very disappointed."

"It was a spirited game, a good performance from ourselves, and China was a very noble opponent," said. "Tonight, we felt that China liked to build out of the back, and we thought that their backline could get disconnected from the rest of their team, and we looked to exploit that."

The American team has made the semifinals of every World Cup since the tournament began in 1991. The US will meet Germany on Tuesday in Montreal, after the Germans beat France in perhaps the best match of the tournament so far, in a penalty kick shootout on June 26. England plays defending champion Japan in the other semifinal Wednesday in Edmonton. 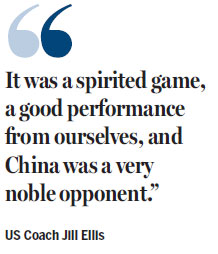 China gets 30% stake in AIIB as bank takes shape

Key events in the history of US gay rights