Chinese investment growing in US market

Chinese investment in the United States is to grow substantially, fueled by increased domestic demand and the abundant resources in the US, the head of a major business association predicts.

Xu Chen, chairman of the China General Chamber of Commerce-USA (CGCC), said the trend could already be seen in the energy and food sectors, citing the recent acquisition of Virginia-based meat company Smithfield by Shuanghui Group, China's largest pork producer.

"This transaction allows US companies to access Asia in a big way and increase exports of American products to China," he said. Smithfield's portfolio of brands includes Armour and Farmland.

"It also gives Chinese consumers greater access to imported meat products that meet stricter food safety standards," he added. "The increase in demand in the Chinese market and complementary cooperation will lead to massive potential in trade and economic investment."

When China initiated its "going out" policy in 1999, outbound direct investment was largely by state-owned enterprises in sectors such as cargo shipping and construction. 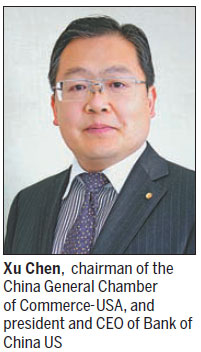 "But in the past two years, more private enterprises have entered the US market, and Chinese investment in the US is shifting to a wider variety of sectors, including Internet technology, real estate, and traditional textile manufacturing, all driven by the rising energy and labor costs in China," said Xu, who is also president and CEO of Bank of China US.

Chinese investments in US businesses, all but nonexistent 15 years ago, now total almost $50 billion, and the figure could reach $200 billion by the end of the decade, according to a study released in May by global research firm Rhodium Group and the nonprofit National Committee on US-China Relations. The study showed Chinese investors had bought or created 1,583 US companies since 2000 and today employ 80,600 full-time workers.

The Chinese government has given domestic enterprises "a big push" to go international, and the US is now open to broader investment, Xu said, citing as an example the Select USA Investment Summit, a high-level forum organized by the US Commerce Department to attract investors from around the world.

"The trade and economic relationship is closely tied to diplomatic relations," the CGCC chairman said. "Good bilateral relations between China and the US strengthen macroeconomic cooperation and promote open trade and investment."

As a newcomer to US investment, China naturally faces challenges.

Data from the US Bureau of Economic Analysis show China accounted for less than 1 percent of all foreign investment from 2010 to 2013. South Korea had more than twice the volume, and Japan 13 times more.

Xu said Chinese companies that make mistakes in the US market largely do so due to a lack of understanding of the regulatory and cultural landscape and a lack of appreciation for the use of attorneys. He suggested companies "do as the Romans do."

"In China, companies count developing strong relationships with government ministries as good preventative planning, but that doesn't work in the US," he said. "Stockholder lawsuits are a fact of life in the US, and executives routinely seek legal advice to plan for such possibilities. Chinese companies must learn to work with local law firms and auditing firms to fit in the market."

The role of the nonprofit CGCC, he said, is to promote Chinese companies collectively, protect their legal rights, advocate for fairer regulations at the federal and local level, and provide comprehensive information for new Chinese investors, especially small and medium-sized businesses.

President Xi's visit to the US will greatly encourage Chinese businesses and send a positive message to the American people that "this investment is supported by the Chinese government and is worthy of their trust," Mr. Xu said.

Founded in 2005, the CGCC has more than 2,000 member companies, making it the largest organization supporting Chinese business in the US