Manny Pacquiao, a world-renowned boxing champion and Filipino politician, was named "Asia Game Changer of the Year" by the Asia Society for his philanthropy and service as a public official, alongside two Chinese "Game Changers" being honored for their contributions to society.

Lei Jun, founder and CEO of Chinese smartphone maker Xiaomi, and Li Cunxin, artistic director of the Queensland Ballet in Australia, were the two Chinese honorees among 10 individuals named on Tuesday as recipients of the Asia Society's second annual Asia Game Changer Awards.

Lei, who is often compared to Apple Inc co-founder Steve Jobs, established Xiaomi in 2010 with his colleague Lin Bin. Xiaomi has since managed to carve out a leading position in China's smartphone market by offering affordable, quality smartphones.

"As a Chinese entrepreneur and national, I'm proud to receive this honor," Lei said through a translator during a press conference after receiving his award. "It shows recognition of the value that Xiaomi has shown to the world.

"Xiaomi works very hard to make our users fans as well as friends, and the Internet provides a platform to give us feedback and innovate on our products," he said.

Li, the Chinese ballet aficionado, said his life has been forever impacted by his dancing career, adding that he encourages the use of the arts as a means to build bridges between cultures.

More than 350 invited guests attended the awards ceremony and dinner gala at the United Nations, including a number of foreign diplomats and UN representatives.

Josette Sheeran, president and CEO of the Asia Society, said during her opening remarks at Tuesday's dinner gala that the awards handed out by the Asia Society are meant to go toward those that are "inspiring others to help change the world with them". 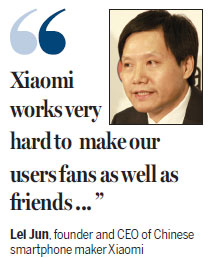 By creating these awards, the Asia Society wants to inform the public of the changes many Asian leaders have achieved across different fields, Sheeran said.

"Manny Pacquiao achieved this remarkable success after a childhood of extreme hunger and poverty," Sheeran said of the night's top honoree. "Today, Manny is a humanitarian force, directing his philanthropy toward numerous causes, including education and the fight against human trafficking. He is a remarkable inspiration and demonstrates the power of giving back to transform people's lives."

Tom Nagorski, executive vice-president of the Asia Society, said the recipients of this year's awards were selected from hundreds of nominations sent in from around the globe.

Pacquiao - who fought Floyd Mayweather earlier this year in May in one of the most anticipated bouts in professional boxing history - has been gaining more attention for his philanthropic causes in recent years. Since 2010, he has represented the province of Sarangani in the Philippine House of Representatives.

Most recently, on Oct 5, Pacquiao announced that he would be making a run for senator in his native country.

Last year's "Asia Game Changer of the Year" Jack Ma, co-founder of Chinese e-commerce giant Alibaba Group Holding Ltd, delivered his congratulations to the new class of honorees in a video address broadcast during the dinner.