Can Chinese 'white lightning' make it in US?

The world's most consumed alcoholic beverage and China's national spirit is trying to make its way into the US. Served in half-ounce shot glasses or made into a cocktail mix, baijiu is gaining recognition, reports Hezi Jiang from New York.

I t is the world's most consumed hard liquor, but sit at a bar in most parts of the US and ask for a shot of baijiu and you'll probably be asked, "What is it?"

It's China's national liquor, pronounced "bye-jeeoh" - English translation "white liquor" - and promoters are seeking to make the drink whose history spans thousands of years a hot one in the US.

Among the most common descriptions for baijiu: "White lightning. Smells like aged cheese; tastes sickly sweet, rotten and spicey all at once."

"It's surprising and rich," said Orson Salicett, co-owner of Lumos, which calls itself New York City's first and only bar devoted totally to baijiu. It opened in May below a hat shop in lower Manhattan's Soho district.

Added co-owner Li Qifan: "Very different from any other liquor one has ever had. Strong, earthy."

Baijiu is commonly made from the grain sorghum, which is allowed to ferment for a few weeks before being distilled, cooled and bottled.

The 100-plus-proof high-proof liquor has remained obscure outside of China, and until recently there has been little effort to promote it in the US.

Bartenders in major US cities who serve the spirit often use it as the base for cocktails, Lumos's specialty. It comes in four fragrances: rice aroma, light aroma, strong aroma and sauce aroma. The flavor may be different, but baijiu's main characteristic stands out: Strong, very strong. "A lot of personality. For vodka, you drink it, and it's gone. Baijiu, it stays," said Salicett.

Baiju-based cocktails and single shots also are available throughout the city. The RedFarm Chinese restaurant on the Upper Westside of Manhattan offers a "Marco Polo" cocktail of baijiu with tomatoes, basil and vinegar. The JakeWalk in Brooklyn created "Shaolin Land", baijiu with an Italian myrtle berry liqueur. Baijiu can also be found at hotels bars in the Peninsula and the Park Hyatt in Manhattan.

Few had tried to mix a baijiu drink due to tradition, and its "too stand-out" taste, said Li. It took her and Salicetti, a veteran mixologist, a year to experiment with baijiu cocktails.

The first listed drink on the menu, Sesame Colada, is a mix of baijiu, white sesame paste, caramelized pineapple, agave, and mangosteen, a popular fruit in China. An almond cocktail is mixed with Lumos's house-made almond milk that's as rich and flavorful as the baijiu, said Li. Both cocktails are served in delicate china cups.

In China, people drank more than 11 billion liters of baijiu in 2012, or more than one-third of all spirits consumed in the world, according to data from International Wine & Spirit Research. And according to McKinsey & Company and UBS, baiju is an estimated $23 billion market.

The high demand for baijiu left Chinese brands of the liquor with no incentive to expand sales beyond China. That was until 2013 when President Xi Jinping's anti-corruption campaign struck the liquor market, and government agencies refrained from purchasing and consuming baijiu.

That caused annual profit in 2014 for the baijiu industry to drop by 12.6 percent from 2013, according to the National Bureau of Statistics of China.

A spokesman for the Wuliangye company, one of the major baijiu manufacturers in China, told Xinhua News Agency that consumption of baijiu is about 7 billion liters per year, but the current baijiu supply is twice that amount.

"Manufacturers sold the majority to the government. Now they have to find new customers," said Jim Boyce, who has partnered with baijiu producers around the world, restaurants and bars to get people to try the spirit. Boyce is Canadian, has lived in China for a decade, and has a blog called Beijing Boyce. He said he does not get paid for promoting baijiu.

He established World Baijiu Day this year on Aug 8 to get people around the world to learn about the drink. On that day he coordinated 28 events in 20 cities in eight countries.

In the US, there was baijiu infused ice cream in Houston; baijiu with hand-pulled noodles and ping pong games in Los Angeles; baijiu with karaoke in the nation's capital; baijiu with dim sum in Miami; and two tasting events in New York City and Portland, Oregon.

"I want the events to be creative so that more people can get interested," said Boyce. "I don't want to convince people to like it; I just want people to try it."

He recommends that Westerners not judge baijiu on one bottle or a bad Gan Bei experience.

"Right now, it's a trendy thing. The question is, will it go from trend to normal?" he said.

"Can an outsider gain an appreciation for Chinese baijiu?" That was the question posed by Derek Sandhaus, an American writer and editor. So starting in December 2011, he vowed to drink 300 shots of baijiu to find out. And his answer: Yes.

Sandhaus wrote on his blog that he gained an appreciation for the drink much earlier than when he finished the 300 shots in six months.

Sandhaus has written a book Baijiu: The Essential Guide to Chinese Spirits that was published by Penguin Books on the first of this month. He also has joined Beijing-based Capital Spirits, LTD, a consulting business that focuses on helping producers and foreign brands navigate the market for baijiu imports and exports.

Simon Dang, co-founder of Capital Spirits, said that for a baijiu brand to be successfully exported to the West, a producer will have to repackage it. "They'll need to update the logos, branding, and slightly tone down the flavor (in the beginning)," Dang wrote in an e-mail to China Daily.

"It'll need an easy name to pronounce and a signature cocktail that can be enjoyed and recognized (think about how the margarita has helped boost consumption of tequila). Once they do this, they can get some traction among consumers and break out of the mold as being just an old Chinese liquor but something more sexy, trendy and fashionable," he wrote.

"Our Capital Spirits, LTD consulting business team has been contacted by a few of the big baijiu producers to help them with these branding issues, so I do have a lot of confidence that Baijiu will become the next big international spirit quite soon," he said.

At the Lumos bar, a shot of Shui Jing Fang costs $23. Most of the bar's $15 cocktails are made with the brand Hong-Kong Baijiu (HKB), produced in China's Sichuan province, bottled in Italy and crafted to appeal to North American and European palates. A half ounce shot glass of baijiu costs $12.

HKB founder Charles Lanthier launched the brand six months ago and marketed it as "hand-crafted baijiu for daring mixology". HKB is 43 percent alcohol, in comparison to Wu Liang Ye and Shui Jing Fang with 52 percent.

Lanthier started promoting HKB from New York City by going from bar to bar. "At first, it's very, very hard," he said. "It's a new category." He said now there are about 40 bars carrying HKB in New York City, 50 to 60 total in the US, and about 20 in London and 15 in Italy.

The Ly family, owners of the Vinn Distillery in Portland, took their family craft from China to Vietnam to the US. Their market expanded from a local liquor store to Oregon and Washington state, and now they are selling it in California.

Houston-based brand ByeJoe and Washington-based Confucius Wisdom also import their baijiu from China and package and sell it in the US.

"Liquor is part of life and part of the culture. Go to a bar and look at the menu, it represents the culture of the place, the nation," said David Zhou, owner of Confucius Wisdom. "China is rising. Rather than say I'm betting on baijiu, I'm betting on China."

"When we were about to open Lumos, I was scared," said Li. "Because this is something no one has done [outside of China]. It's either a big success or a big failure. So far it's going well. And it's surprising that most of the customers accept baijiu very quickly. Some go right from their first cocktail to shots." 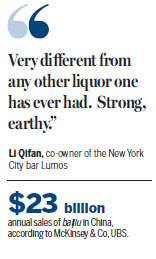 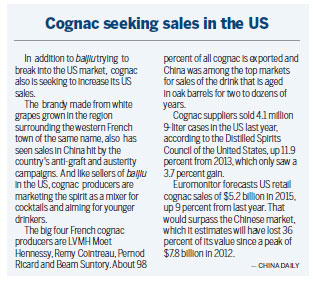