As a representative of the San Francisco mayor's office in China, ChinaSF has helped more than 26 Chinese companies recruit in San Francisco over the past five years. It has also helped many local companies provide services or establish a presence in China.

"Nothing is ever easy, and I can't say which is the most challenging, because there are always challenges when you are trying to connect two parties who come from two completely different cultures,"DarleneChiu Bryant, the executive directorof ChinaSF, told China Daily in an exclusive interview. "ChinaSF is on track to becoming the premier platform for facilitating inbound investment to San Francisco."

Bryant, the one-time chief communications manager for former San Francisco mayor Gavin Newsom, was in on the planning and formation ofChinaSFin 2008.

Facing surging demand from US entrepreneurs who are seeking Chinese capital, Bryant suggests opportunity seekers "take it slow", "study and assess the market".

The culture in China is very different from the US, she said, and Americans should really be careful with the phrases like "no problem" and "we are the biggest".

"Most importantly, find out which government officials are behind potential partners in China," she said.

There are many official exchanges between China and the US - that is always important, because it sets the tone for future endeavors, she said.

"I remember a luncheon hosted by Mayor Villaraigarossa in Los Angeles last year, when vice-president Xi met with vice-president Biden at the time - look at how fast things have moved at the State level," she said. "California announced that they opened an office in Shanghai this past April!"

Earlier this year, ChinaSF was part of California governor Jerry Brown's trip to China, during which it was announced that Joinn Labs-Staidson was coming to the San Francisco Bay Area by buying the old Bayer Facility in Richmond, CA.

Bryant also said there has definitely been an increase in investment from China into San Francisco, and ChinaSF is seeing all the big real estate developers scoping out projects in San Francisco. 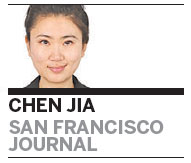 Wang Shi, the Chairman of Vanke, said in an earlier interview that the best way to be successful in a foreign investment project is to cooperate with local partners, even completely rely on them. "So our US investment will follow the same principles."

"By being located in San Francisco, we are well-positioned to grow into the San Francisco Bay Area, California, and North American markets. We see these markets as key to our company's growth and we believe that we have chosen the perfect location from which to start and quickly succeed," said Lu Tingxiu, chairman of China Sunergy Board, which has its US headquarters in downtown San Francisco thanks to ChinaSF.

Established in 2008, ChinaSF is an economic initiative of San Francisco in close partnership with the San Francisco Center for Economic Development. As a public private organization, it represents both the city and county of San Francisco.

With five full time staff between China and SF, two in Beijing, one in Shanghai (soon to be two), ChinaSF is looking forward to opening a third office in Guangzhou soon.

"Our constituents speak for us - the talent is here in San Francisco - and most importantly we have a Chinese Mayor that gets it and welcomes Chinese investment and partnership," she said.

The fact that San Francisco is the center for innovation and that more and more companies are coming to San Francisco to set up offices tells people that this is the place to be, work and collaborate.

"Clustering is really the new wave of operations now," Bryant said. "Look at all the incubators and shared workspace such as Rocket Space, Project Runway, the Hatchery and others.What ChinaSF has seen is that Tech companies are coming from China and hiring locals. They want to assimilate."

Trending news across China on Sept 18

EU ready for talks with China on investment pact

Space station to open for foreigners

Number of China's female billionaires on the rise