US hacking into China a common problem 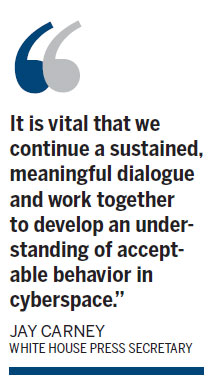 The Chinese military has been the target of a high number of cyberattacks from abroad, the Defense Ministry said on Wednesday in response to a Tuesday report by United States computer security firm Mandiant that accused China's military of hacking US websites.

Ministry spokesman Geng Yansheng said computers used by the military have been attacked on many occasions. "A considerable number" of the attacks, he said, came from the US, judging from the IP addresses of the alleged attackers.

Geng said that every country should handle cyber security in a "professional and responsible way". He did not directly accuse the US government of being behind the attacks as IP addresses can be disguised.

Experts that China Daily spoke with said that cybersecurity is Washington's new form of levying pressure on the Chinese military.

The Tuesday report alleges that a Chinese military unit in Shanghai was behind a series of cyberattacks against US companies. The Obama administration said it has repeatedly expressed its concerns about cybertheft to the highest levels of the Chinese government and military.

On Wednesday, the Obama administration said it will attempt to mitigate "the theft of US trade secrets", including increased diplomatic communication with foreign countries, promoting cyber security among US companies, making the investigation and prosecution of foreign companies and governments involved a priority with tougher law enforcement, and raising public awareness.

Victoria Espinel, Obama's intellectual property enforcement coordinator, said at a White House news conference that the Obama administration aims to stop the theft of trade secrets by foreign competitors or foreign governments by any means - cyber or otherwise.

White House Press Secretary Jay Carney, when asked about whether the strategy is aimed at China, said that "we need to separate reports yesterday about hacking".

He said the United States and China are two of the most important players in the cyberworld and "it is vital that we continue a sustained, meaningful dialogue and work together to develop an understanding of acceptable behavior in cyberspace".

Richard Bejtlich, the chief security officer at Mandiant, said the company decided to make its report public in part to help send a message to both the Chinese and US governments to communicate with each other "without having to worry about sensitivities around disclosing classified information", according to media reports. The Defense Ministry said Mandiant's report is groundless both factually and legally, and "releasing irresponsible information will not help solve problems".

"China and the United States have maintained communication over the (hacking) issue," Foreign Ministry spokesman Hong Lei said at a news conference on Wednesday.

Geng refuted the report, saying it "lacks technical proof as it only relies on linking IP addresses to reach a conclusion the hacking attacks originated from China".

Cyberattacks are global, anonymous and deceptive, he said, and it is often difficult to identify the sources of attacks.

Ye Zheng, an information specialist from the People's Liberation Army, said IP addresses cannnot verify a hacker's origins and it is hard to prove there is government support behind the cyberattacks.

Su Hao, a professor of security affairs at China Foreign Affairs University, raised the possibility that competition could be a reason for the US allegations because the level of Chinese information technology has progressed recently.

Experts said recent allegations could be part of an effort by lobbying groups and private companies to push Congress to pass legislation and increase funding for cyber security.

Pointing out a threat is a convenient way for Washington to seek larger defense budgets and expand cyber security forces, said Hu Xiaofeng, an expert on Chinese military.