By 2025, Asian Americans are projected to be 18 percent of California's population and comprise more than 12 percent of registered voters, according to a survey by the California League of Conservation Voters.

Charlie Woo, chair of the Center for Asian Americans United for Self-Empowerment (CAUSE), decided to found his organization 20 years ago when he noticed that Chinese immigrants and Asians in general didn't participate in politics as much as other minority ethnic groups.

CAUSE is a nonprofit, nonpartisan, community-based organization with a mission to advance the political empowerment of the Asian Pacific Islander community through voter registration and education, community outreach and leadership development.

"I always remind people that CAUSE is small. We don't have the resources to tell every Asian American to participate in politics. But through leaders, we can," said Woo. "My philosophy is to invest in our future leaders by investing in political education in the younger generation. They will impact their peers."

Besides Asian-American students, the internship enrolls African-American and Latino students as well. "We have a firm belief in diversity," Woo said.

Students are sent to work directly with the state legislators and city councilmen. Interns also receive leadership training from elected officials and community leaders and join learning sessions with State Assembly members and Senators in Sacramento, getting a first-hand, inside perspective on how the government works.

In 2012, Woo started the Civic Engagement Leadership Fellowship (CELF) to train Chinese graduate students to become the Chinese community leaders of tomorrow. In May this year, six master's students from USC graduated from this internship.

Chinese graduate students often find it hard to find the internship in politics that is required by many universities, Woo explained. "It is our job to create the opportunities for the Chinese students," he said.

Woo also helps Chinese graduate students discover their important role in the immigrant community of the US in general. "We ask them to define political issues that most affect the Chinese community, then to use their language skills to translate these issues, and then to educate new immigrants," Woo said.

Earlier this year, some Asian-American state legislators, all Democrats, angered fellow party members when they opposed a measure that would have asked voters to restore affirmative action at California's public universities. They had come under intense pressure from Chinese Americans who feared it would make it harder for their children to get into California universities.

"I think Asian-American legislators have taken a bum rap," Woo said. "The community pressure on them was so great."

CAUSE helped the Asian-American community voice their concerns in an appropriate way. "I think Asian Americans have been very vocal about their feelings, but that is not enough," said Woo. 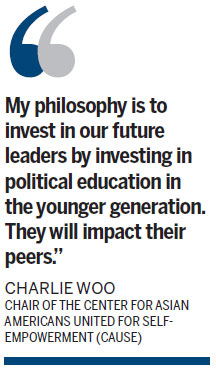 "It's not just about protesting and being loud. It's about a strategic political procedure. It's about how your concerns are logically and appropriately expressed," Woo said.

CAUSE succeeded in redirecting the Chinese families' emotional reaction into a political process by reframing the conversation, giving the public a better understanding of Asian Americans' position.

"The Asian American community needs to get the word out that we are not opposed to diversity. However, to achieve diversity, each student should be judged on their own merit. Asian students and families should not sacrifice their own individual rights because of another Asian family's achievement."

"For each of these three qualifications, we need to work twice as hard because we are a minority here in the US," Woo said.

Thanks to Woo's personal engagement, support to Asian political leaders has strengthened through CAUSE's efforts.

Woo was the only Asian American to chair the 122-year-old Los Angeles Area Chamber of Commerce. He previously served on the California Commission on Asian and Pacific Islander American Affairs and the State Commission for Economic development.

He is currently on the boards of Pitzer College, the LA Police Foundation and Southern California Public Radio, and was previously on the boards of the LA Library Foundation, Town Hall Los Angeles, LA Inc, LA's Best, the American Red Cross LA Chapter, YMCA Metropolitan Los Angeles and the UCLA School of Public Affairs. He is a member of the Committee of 100 and the Pacific Council of International Policy.

"Now Asian Americans have a voice," said Woo. "And our younger generation is going to make our presence even stronger."

Woo came to the US from Hong Kong at the age of 17 to attend UCLA and earned a master's degree. He and his wife live in Rancho Palos Verdes. His two sons attend college at Stanford and UC-Berkeley. 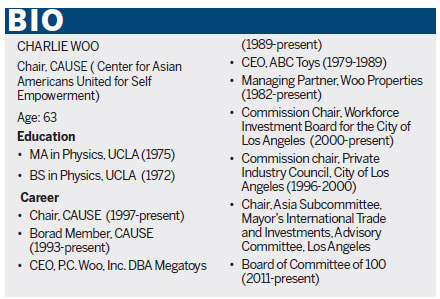 China, US fight terror on the Internet

How to give is focus of philanthropy forum

China, US diverge on approaches to nuclear energy

Clearer view of Africa called for