Wal-Mart initially invested in YHD in 2011 and increased its stake to more than 51 percent in October 2012.

"Building the fulfillment network for fast-moving consumer goods is the hardest network to build, and that is what Yihaodian has done," Dan Toporek, a spokesman for Wal-Mart's global e-commerce office, told China Daily.

YHD has chosen to augment its position as an online grocery shopping market with a number of items, including appliances and clothing.

Kelland Willis, a global e-commerce analyst with Forrester Research, a US-based research and advisory firm, said the move into consumer products could hold some potential hurdles for YHD.

"It's a completely different model for produce: more distribution centers, a more accurate inventory system, etc," Willis said. "Compare that to the tech industry, where if you're a multi-brand retailer you know your margins are bigger because the sale cycle is longer." 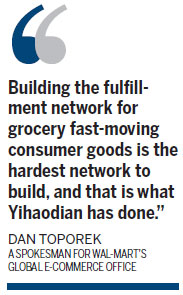 That said, the ability to drive volume is there if YHD and Wal-Mart can "drive consumer adoption", she said.

"Western businesses that have done well online in China thus far have been those that have partnered with existing local digital players," Willis said in an interview with China Daily. "Wal-Mart realized that partnering with an existing business that already has significant traffic - which can be expensive to acquire - will be very important to their strategy and YHD serves a massive area."

“Growth rates are extremely high and Chinese consumers have embraced digital trends quite quickly, which shows the sheer power this market has,” she said. “All of this makes for a perfect storm in e-commerce market growth [in China]."

Yu Gang, YHD's co-founder and chairman, said that speed is everything in the Chinese e-commerce market.

"In the United States people accept delivery in five to seven days; in China customers are spoiled," Yu told the Wall Street Journal. "Same-day or next-day delivery is a must. We figured groceries were the hardest to do, and if we could excel there, we could expand quickly into other products."

YHD, founded in 2008, is an online business-to-consumer (B2C) e-commerce grocery website that provides same-day and second-day delivery services to customers in more than 100 Chinese cities.

Wal-Mart, a multinational retail conglomerate headquartered in Bentonville, Arkansas, runs an international chain of department stores, including Wal-Mart Supercenter and Sam's Club. The company oversees nearly 11,000 stores in 27 countries and manages e-commerce websites in 10 of those markets.

Walmart China, which comprises 400 retail units and more than 100,000 employees, began with the opening of two stores, a Walmart Supercenter and a Sam's Club, in Shenzhen in 1996.

But just like any e-commerce player in China, YHD and Wal-Mart must compete against China's largest e-commerce company, Alibaba Holding Group Ltd, which is expected to bring its IPO in the US in the coming weeks.

Hotline to help out Chinese overseas