Available at Apple online and in stores, with three major carriers

The iPhone 6 and 6 Plus will be available in the Chinese mainland beginning Oct 17 from the Apple online and retail stores and an expansive network of retail stores of three major carriers - China Mobile, China Telecom and China Unicom - after winning approval by China's Ministry of Industry and Information Technology (MIIT).

"We are thrilled to bring iPhone 6 and iPhone 6 Plus to our customers in China on all three carriers at launch," said Apple's CEO Tim Cook.

The MIIT released a statement on Monday to authorize iPhone 6 and iPhone 6 Plus' sales on the Chinese mainland since the products met requirements and standards of telecommunications regulation during a rigorous security testing.

During the review period, media suggested that Apple's iOS8 system had a risk of leaking users' private information for malicious use, which got the ministry's attention.

According to the media, three back-end programs of the new iPhone models may allow third parties to get access to the phone through the Internet via computer.

In response to the suspicion, Apple submitted materials to the Chinese government stating that the company had already adopted new security measures in its new system and could not get access to users' information without their permission. 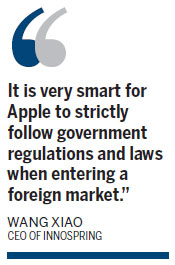 Apple also launched a new privacy website to explain how they handle customers' personal information and what they do and do not collect. As stated on the website, Apple respects customers' privacy and protects it with strong encryption, and does not "monetize" the information customers store on their devices.

"It is very smart for Apple to strictly follow government regulations and laws when entering a foreign market," said Wang Xiao, CEO of Innospring, a Silicon-Valley based technology incubator.

Customers should understand and support the regulations promulgated by the government to manage countries' information security, said Wang, who believes that every country has their own measures to protect its information security and privacy, which is very necessary.

"I can understand why those companies want to collect data about their users," said Wang, adding that some of the data are used to analyze users' behavior to improve products and services.

The key to ensuring information security and privacy is to standardize the management process, both of the government and companies. They should handle the data under the rules of justice, fairness and transparency.

Customers should be told clearly about what kinds of data they collect, who can see it and what's going to happen to their personal information when they use an Apple product, said Wang.

US sends 700 soldiers to Liberia to fight Ebola