The family of Hong Yen Chang, an early Chinese immigrant, breathed a collective sigh of relief after the California Supreme Court finally granted him posthumous admission to the bar after he was denied a license to practice law in California in 1890 because of his citizenship.

The reversal of the 125-year-old decision came on Monday, along with an apology from the California Supreme Court for decades of discriminatory laws against Chinese immigrants.

"Even if we cannot undo history, we can acknowledge it and, in so doing, accord a full measure of recognition to Chang's path-breaking efforts to become the first lawyer of Chinese descent in the United States," the court wrote in its Monday ruling.

"It all turned out for the best even though this is justice 125 years too late," Rachelle Chong, grandniece of Hong Yen Chang and spokesperson of the Chang family, told China Daily.

"The family was absolutely thrilled because we feel that the stain has been removed from his history, and all of his persistence paid off in trying to become a California lawyer," said Chong, who is a prominent lawyer in San Francisco and the first Asian-American commissioner of the Federal Communications Commission.

Chang first came to the US in 1872 at the age of 13. He attended Yale University as part of the Chinese Educational Mission, a pioneering program initiated by the Chinese government. He earned a degree from Columbia Law School in 1886.

"Our granduncle made great efforts to become a New York attorney," Chong said. "Then he came to California in 1890 because he wanted to help the Chinese immigrants in the San Francisco Bay Area." 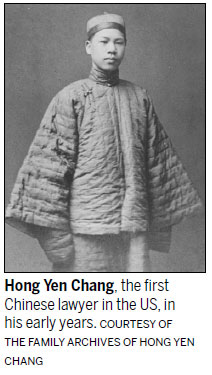 However, unlike New York, California would not allow him to become a lawyer, ruling that the naturalization certificate he had received in New York was void as a result of the Chinese Exclusion Act, and California law prohibited noncitizens from practicing law in the state.

"He went on to become a successful banker, diplomat and professor, but I know the family was always disappointed that he couldn't use his law degree to help Chinese people at that time," said Chong.

Since 2011, UC Davis law professor Gabriel Chin and a group of students from the Asian Pacific American Law Students Association (APALSA) had been working to petition the State Bar of California and California Supreme Court on Chang's behalf.

"I have known about this case for at least 20 years and it always struck me, as a lawyer, how harsh it was that somebody had gone through all that education and couldn't practice law," said Chin, who is also a faculty adviser to APALSA.

Other states have posthumously admitted applicants who were excluded from their respective bars based on similar discriminatory laws, said Chin.

"I think it (the court's decision) is particularly significant that it comes from a state supreme court that has Asians, African Americans, Latinos and women on it," he said.

Chong said it was also significant as it reminds people not to forget there was a time when no immigrants were allowed to practice law and represent immigrants from their home country.

"It also reviewed the stilted and rather appalling laws over the decades that were persecuting Chinese immigrants here in California. It apologizes for them and makes it clear that these types of discriminatory acts are illegal under equal protection of the law," she said.

The decision was also backed by advocates like the Advancing Justice-Asian Law Caucus, an organization dedicated to promoting fair and equitable treatment for all.

"Drawing the connection to the struggles of our immigrant communities today, we at Advancing Justice-Asian Law Caucus will continue to challenge the discriminatory immigration, race and language barriers that many immigrants face now to obtaining equal opportunity in all areas of life, including education and employment," she told the newspaper.

Three US citizens among dead in avalanche after Nepal quake

Chinese rally across US to support NYC police officer under indictment

Abe's US trip: sense or sensibility?

China to overtake US in mobile gaming market