A new exhibit at the Asia Society Museum in New York showcases the work of eight artists and attempts to highlight some of the biggest changes in China.

De/Constructing China: Selections from the Asia Society Museum Collection juxtaposes video and photographic works from seven China-based artists and one in Mexico to help tell the story of China's rise to economic prominence.

The installation works together to form a narrative that shows "how people and society have responded to the changes and growth in China," said Michelle Yun, Asia Society's senior curator of modern and contemporary art.

"This exhibit is part of an ongoing exhibition of our contemporary collection," Yun said Thursday during a media preview. "It shows the evolution of China in economic excellence. But it's also an introspective, thoughtful look on how China has evolved."

Ink City, a stop-motion animated short film by Chen Shaoxiong, a Guangdong province native who now lives in Beijing, uses a combination of video and traditional ink painting to create an overview of life in China's busy city centers.

The film was created from more than 300 individual ink paintings that Chen created to represent China's complicated relationship with its sociopolitical past and its rapidly evolving present. 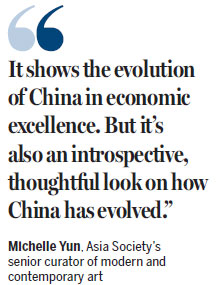 In Safely Maneuvering Across Lin He Road, Lin Yilin, who hails from Guangzhou and splits time between Beijing and New York, uses the theme of a brick wall to address the issue of widespread urbanization throughout China.

The video focuses on the work of a single man as he transports bricks one by one across a busy street, providing a sharp contrast to the hum of construction around him.

Other items in the exhibit include the photography of Zhang Dali and Sze Tsung Leong, both of which deal with the disruption caused by gentrification in local communities. Hai Bo's landscape stills showcase the chasms between the country's urban and rural populations.

China's race to establish itself on the world stage has helped shed light on some of the contrasts in its society, Yun said.

In the introduction to the exhibit, the Asia Society wrote: "Now that China has surpassed the United States as the largest trading nation in the world, it is a timely moment to reflect on how China's strides to attain this coveted position have affected the social and physical landscape of the country, and how this new status will impact its society."

Pentagon to greet General from China