Real estate may be the most highly regulated and taxed asset class in the US and is considerably more regulated and taxed than in China, which can be challenging even to the most sophisticated and experienced investor, Alan Pomerantz, a senior counsel with Pillsbury Winthrop Shaw Pittman LLP, told a panel on Chinese investment in US real estate in San Francisco on May 24.

In addition to the regulations at the federal level, each state has different regulations that come in the form of ownership restrictions and environmental reviews. On the tax side, while there exists a tax treaty between the US and China, it generally does not apply to taxes imposed on profits by states, cities and counties. 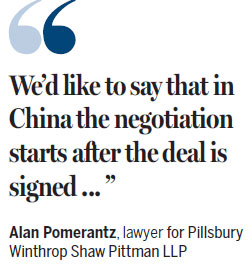 "The problem is the market always goes down, it always has and it will again," said Pomerantz. "When it goes down what happens in China is banks and borrowers sit down and talk about it. In the United States, not only do they not do that, the law prohibits them from doing that.

"Chinese people do not use lawyers the way US people use lawyers," he added. "We'd like to say that in China the negotiation starts after the deal is signed; in the US, it's exactly the opposite."

It would be a "big, big surprise" for Chinese investors and their US partners, US construction companies and US banks if they were not aware of when there's a hiccup in the real estate market, Pomerantz said.

Chinese people believe the most important thing is the relationship and that guanxi, or relations, can fix almost anything, said Thomas Shoesmith, a partner at Pillsbury who leads the firm's China practice.

The truth is, in the US, the documents rule. "Rules are rules and the rules are not flexible," he said. "Government officials have very little ability to bend rules to help businesses make deals."

When asked why they made the investment, the Chinese investors would say "someone I trust invested there and told me to invest", he said.

Shoesmith said rules, not trust, are key to successful transactions. "In China, often business is personal. In the US, business is business," he said.

"I've seen a lot of deals. I've never seen a projection that didn't make money, but not every deal makes money," said Pomerantz. "It's easy to give your money to somebody to buy something. The barrier is how to make money and how when things don't turn out exactly the way the projection shows, which is almost always the case."