Giving voice the past 20 years for the 200,000 young women and girls from the Chinese mainland, Korea, Taiwan, the Philippines, and throughout the Asia-Pacific region who were held as sex slaves by the Japanese army, Honda wrote a resolution while in the California state Assembly directing Congress to urge the Japanese government to apologize for the Nanjing massacre in 1937, where Japanese soldiers killed 300,000 Chinese civilians, and the enslavement of the so called "comfort women".

In 2007, "I introduced House Resolution 121, which also urged the government of Japan to acknowledge and apologize for its World War II "comfort women" system. Both bills passed unanimously in the California state Assembly and the US House of Representatives.

"Ultimately, bringing closure, peace and justice to the victims of World War II is about human rights," he said.

Honda acknowledged the "incredible contributions of the Chinese-American community" to the United States.

"My congressional district is the first in the continental US to have a majority of its residents be Asian American Pacific Islander. I know the incredible contributions of the Chinese-American community in my district," Honda said. "Since their arrival in the US, the Chinese and Chinese Americans have left an indelible mark in our nation's history."

With this in mind, the House passed Honda's bill in May 2009, to honor Asian American and Pacific Islander soldiers, including those of Chinese ancestry, who fought bravely in the US Civil War.

"American history would be totally different without the contributions of Asian Americans. I also supported legislation, which the House of Representative unanimously passed, (for the US) to finally apologize for the anti-Chinese exclusionary laws," he said.

On June 18, 2012, the House unanimously passed a bipartisan resolution introduced by California US Congresswoman Judy Chu, chairwoman of the Congressional Asian Pacific American Caucus, formally expressing the regret of legislators for the Chinese Exclusion Act of 1882 and other legislation that discriminated against people of Chinese origin in the United States by stopping the Chinese, and the Chinese alone, from immigrating, from becoming naturalized citizens and from having the right to vote. The law was repealed in 1943.

From hard labor building the Transcontinental Railroad linking our coasts to their academic contributions, the Chinese-American community, especially the young generation and new immigrants, should be beyond proud of their ancestry and heritage, Honda said.

"That is why I strongly encourage those new immigrants to never forget where they come from - and to always learn, keep and carry their history, culture and language, no matter where life takes them," he said.

California and China enjoy a close relationship owing to geopolitical reasons, and the Golden State has much to offer in terms of clean energy and high technology, Honda said.

California is the leading US destination for Chinese tourists and received roughly 1 million visitors from China in 2015. That number is expected to exceed 1.8 million by 2018, a 78 percent increase over 2014, Caroline Beteta, president and CEO of Visit California, said in February. 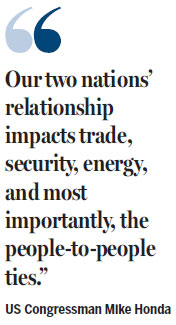 "California has led the nation in its focus on renewable energy," Honda said. "In fact, one of our largest political groups has called for the state to operate on 100 percent renewable energy by 2050. Even though coal and oil are the easy way to power an economy, China could learn from the mistakes made in the history of the US and focus on the renewable energy."

California also has an innovative university and college system that has created some of the most talented and imaginative engineers and high-tech entrepreneurs in the world.

"A higher education system with freedom of both study and speech for students and professors alike could result in an incredible innovation explosion for China," he said.

As the representative of Silicon Valley, "I can definitively say that in California, we have been at the cutting edge of innovation in nanotechnology, clean energy, telecommunications, cloud computing, digital media and many other exciting frontiers," he said.

As China looks for more investment opportunities and synergies among institutions in the Bay Area and in China, "our economic relationship will only get stronger and stronger. We must change our broken immigration system to make it easier for Chinese graduates of our schools to stay and contribute to the American economy," he said.