Cyber security row is likely to have fallout

Former National Security Advisor Tom Donilon admitted that the revelations by Snowden are damaging in terms of US relations with other countries and the US Internet companies' commercial interest all over the world, such as in selling their Internet, cloud and hardware products.

"Those damages are for real and need to be addressed," Donilon said during a seminar on Monday at the Center for Strategic and International Studies in Washington.

Snowden has revealed that NSA has engaged in massive cyber espionage against China, including Chinese government leaders, individuals, universities, hospitals as well as corporations, such as Huawei Technologies and other telecom firms.

Similar activities have also been conducted by NSA against companies in Germany, Brazil and other countries. The true picture is expected to be much larger since only 1 percent of the files Snowden gave to the British newspaper, The Guardian, has been made public so far.

Stephen Hadley, a former national security advisor under George W. Bush and now chairman of the Institute of Peace in Washington, said indictment of five PLA officers by the US Justice Department two weeks ago is an effort to impose a penalty, but he acknowledged that there are a lot of problems.

"One of the unfortunate things about US-China relations is once we hit a political hiccup, the first thing either one country or the other does is cut off military-to-military ties. In fact, having military-to-military interaction is a very important thing. Indicting five PLA officers threatens that," he said.

Admitting that indicting five PLA officers is not going to turn out to be the best and most useful tool, Hadley believes just diplomatic interactions are not going to work.

Donilon said it's very important to reject the equivalent of cyber espionage and cyber theft of intellectual property.

As national security advisor, Donilon was the first US official back in March 2013 to publicly point a finger at China in terms of so-called government-enabled cyber theft of US corporate secrets, an accusation China has denied.

Donilon said the US has been engaged with the Chinese, clearly referring to a bilateral cyber working group set up last year. He said China has used Snowden's revelations as a pushback.

China announced that it suspended the working group immediately following the US Justice Department's indictment of the PLA officers. 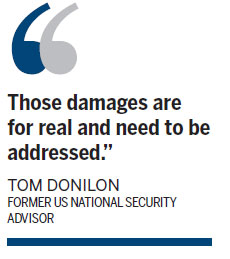 Donilon, now a distinguished fellow at the Council on Foreign Relations, emphasized it's very important to get back to the dialogue, but also said "it's very important to reject the equivalent argument Chinese might make between espionage and a criminal cyber activity and cyber-enabled economic theft."

He believes the conversations with the Chinese have to go broadly and beyond cyber and to say this is going to affect the overall quality of the bilateral relationship. "This is going to be something to be raised repeatedly with the leadership of China by the highest level in the United States," he said. In Beijing, China's Ministry of Defense spokesman Geng Yansheng said the US has been plotting to hype the cyber issue for a long time. He said the US will find excuses to hype the threat from other countries when it needs to expand its cyber troops.

US Defense Secretary Chuck Hagel said two months ago to increase the US cyber army to 6,000 strong by the year 2016.

Geng said on May 29 that the Mandiant report released early last year accusing a Chinese PLA unit of cyber theft of US corporate secrets and the indictment of the Chinese PLA officers all reflect the ulterior motives of the US.

He said the Chinese army is improving its information technology and takin measures to "fasten the fences of cyber security, install a theft-proof door and lock its safe" to ensure cyber security.

China has long claimed to be a major victim of cyber attacks, many of which originated from the US, which boasts the strongest cyber capability than any other nation on Earth.

US calls for missile defense against DPRK