With US President Barack Obama's foreign policy speech at the West Point military academy drawing fire from both right and left, National Security Advisor Susan Rice defended her boss by reaffirming US' leadership role in the world.

Touting the US military supremacy, growing economy, energy independence in sight and a vibrant demography, Rice said "no other nations can match the enduring foundation of our nation's strength."

Her speech at the Eighth Annual National Security Conference by the Center for New American Security (CNAS) in Washington on Wednesday afternoon focused on mobilizing coalitions and galvanizing the international community to address problems that no one nation can solve alone. She described it as the hardest and most important part of how the US leads on the world stage.

"Our approach must meet the new demand of a complex and rapidly changing world. The architecture that we built in the 20th century must be re-energized to deal with the challenges of the 21st," she said.

Without naming China or India or Brazil, Rice said with emerging powers, the US must be able to collaborate when interests merge, but also to define the differences and defend the US interests when they divert.

Rice reassured the US commitment to its allies, but also said the US expects its partners to share the burden of collective security, implying that the US' European allies have not spent as much as they should on defense.

The former US ambassador to the United Nations also described climate change as a great national security challenge and pledged US leadership in working towards a framework at the climate summit in Paris next year.

While Obama has used executive power to reduce US carbon emissions, such as rules regarding power plants, the resistant US Congress, where climate change deniers abound, has been a huge obstacle to major US commitment and leadership in this regard.

But he said leadership, if not by force, needs credibility and trust. "Trust is probably the single most important commodity in international relations," said Ischinger, a German diplomat who once served as German ambassador to the US. 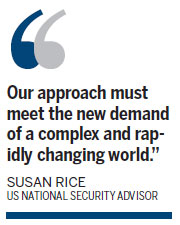 "Trust between the United States and Europe has been damaged," he said, noting the revelations by former National Security Agency contractor Edward Snowden. Snowden has disclosed widespread US surveillance of its European allies, including monitoring the phone calls of German Chancellor Angela Merkel.

Ischinger said many Germans feel that the Americans are not listening to them anymore, and it will take time and great efforts from both sides to rebuild the trust between the US and Europe.

Ischinger said the world is changing fast, with the emerging powers of China, Brazil and others, and the world will not be dominated by the US forever.

He called on Europe, the US and others to work together to reform global institutions, such as the United Nations Security Council, the International Monetary Fund and the World Bank.

Nicholas Burns, the former undersecretary of state and now a professor at Harvard University, believes the very difficult challenge for US president and secretary of state in the future will be to balance the two things in its priorities.

"On one hand, we are one of China's most important partners in the world, on trade and investment, on climate change, on counterterrorism and nonproliferation," he said."But if you look at other half of the equation, we are the competitors of powers in Asia."

Vikram Singh, vice-president of the Center for American Progress and a former deputy assistant secretary of defense for South and Southeast Asia, said people always hear that things between China and the US are terrible.

"But actually things are remarkable," he said.

Singh cited the establishment of mechanism, such as the Strategic and Economic Dialogue (S&ED), as an example of the two countries constantly engaging with each other. The next session of S&ED, the highest annual platform between the two nations, is expected to be held in Beijing in July.

Singh also believes China, the US and other nations in the region could work together on common challenges to achieve a win-win situation.

Zhu Feng, a professor at the School of International Studies of Peking University and a visiting fellow at the Brookings Institute, agreed with the importance of the US leadership role that has benefited China in the past three decades.

But he expressed disappointment at the denial by Japan, a key ally for the US in East Asia, on the dispute of the Diaoyu Islands in the East China Sea. Tension has risen since the Japanese government nationalized the islands in late 2012. Zhu called the US to rein in Japanese Prime Minister Shinzo Abe.

US sends wrong message on China

US, China airline market heating up

US clearly in the wrong over 'human rights'

Opinion: US adrift on China