With North Korea's nuclear program rattling the region and the US struggling to secure the release of three Americans held in North Korea, experts are already tapping into a relatively remote topic: Korean unification and its potential impact in Northeast Asia.

Stapleton Roy, former US ambassador to China and now a distinguished scholar at the Kissinger Institute on China and the United States at the Wilson Center, believes China would not accept a unified Korean Peninsula to be used as a platform by great powers against China, clearly referring to the United States.

Roy also believes that a unified Korea will have a great impact on Chinese psychology if China is left to be the last country not unified.

China and Korea are two of the four countries that remain divided since the WWII. The other two, Germany and Vietnam have achieved unification.

China has supported a peaceful and independent Korean unification achieved without causing instability to the region. Foreign Minister Wang Yi described the realization of independence, peaceful unification and peace and stability of the Korean Peninsula as "completely conforming to the fundamental and long-term interests" of China, South Korea and North Korea.

South Korean President Park Geun-hye, who took power in February of last year, has been promoting trust-building between the two Koreas to move towards final unification.

Kurt Campbell, former US assistant secretary of state for East Asian and Pacific affairs and now chairman and CEO of The Asia Group, a consulting firm, noted that pressure put on North Korea - such as encouraging it to pursue reform and abandon nuclear programs - has not been successful,.

"But what we have been successful at generally is keeping the Six-Party group of nations together," Campbell said, referring to the Six-Party Talks which involve the two Koreas, China, the US, Japan and Russia in finding a solution to the denuclearization of the Korean Peninsula.

Campbell praised China's great foreign policy success in promoting the One China concept and suggested South Korea could learn from it.

He said that China has realized over the years that North Korea has not always acted in its best strategic interest. "What that means over time, I am not sure we know, but that was a profound change compared with 20 years ago, when the prevalent sentiment in Beijing was quite different about North Korea," he said.

Christopher Johnson, senior advisor and Freeman Chair in China studies at the Center for Strategic and International Studies (CSIS), described Xi's July summit with South Korea President Park Geun-hye as "very successful". He said that China's core interest in Korean unification has not changed, as in ensuring there will be no US troops on the Korean border with China.

Sydney Seiler, the new US special envoy for the Six-Party Talks, said the US remains committed to peaceful denuclearization of Korean Peninsula through authentic and credible negotiation.

"Talks must lead to a stated purpose, in this case, the denuclearization. In order to be authentic, talks must demonstrate a possibility for concrete actions, for concrete progress to be credible," he said.

The US has long insisted that any talks must start with North Korea honoring its commitment made at the September 2005 Six-Party Talks when it agreed to abandon its nuclear program. 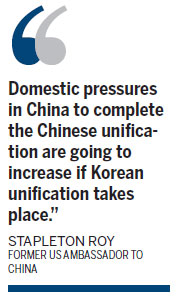 The Six-Party Talks have been stalled since 2008 when the US and North Korea wouldn't budge from their positions. North Korea has insisted that no preconditions should be set for resuming the dialogue.

Seiler said the broad US policy towards North Korea goes beyond talks. It contains three major pillars of "diplomacy, pressure and deterrence" to counter and defend from North Korea's threat, according to Seiler, who was director for Korea in the White House National Security Council before taking the new post.

While security was a key issue in the seminar, much of the discussion on Thursday focused on the economic benefits of a unified Korea, not just to the two Koreas, but also to Northeast Asia.

Several experts described how South Korea, with its aging population, could tap into North Korea's abundant and cheap labor as well as its rich mineral resources and make the North a transportation hub linking China and Russia with South Korea.

Kim Dongsoo, director of the Research Planning and Coordination Division of the Korean Institute for Industrial Economics and Trade, said the economic synergy of Korean unification is enormous and perpetual. He suggested that South Korean companies, such as Hyundai, could use North Korea as a hub to the vast Chinese market. China is already South Korea's largest trading partner and the two countries are conducting Free Trade Agreement talks to further boost their bilateral trade.

Matthew Goodman, a political scientist at the CSIS, warned that there could be too many unknowns for Korean unification, such as the nature of transition.

While most of the experts based their scenario on a sudden collapse of North Korea, Goodman said that income gap between the two Koreas being wider than the one between East and West Germany meant that it would be a lot more expensive for the Koreas to unite.