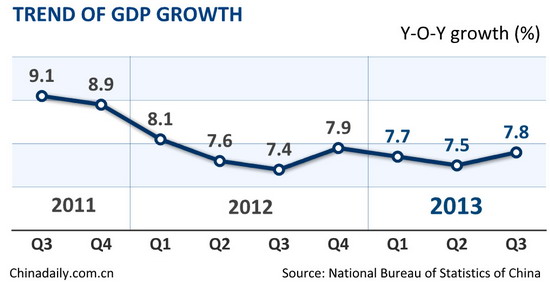 The year-on-year growth from June to September is the highest so far this year, according to the National Bureau of Statistics.

Analysts said such a rate will help boost policymakers' confidence when they map out the next round of reforms at a top leaders' meeting in mid-November.

In the first three quarters of the year, year-on-year GDP growth averaged 7.7 percent, exceeding the government's target of 7.5 percent for the whole year.

"As the main economic indicators remain within a reasonable range, more efforts should be made to promote reforms and opening-up, and to further transform the growth pattern for long-term development," National Bureau of Statistics spokesman Sheng Laiyun said on Friday.

Economist Ma Guangyuan was quoted by financial information website hexun.com as saying the latest growth rate is not a surprise.

The key to the quality of China's economy is no longer how fast it can grow, but whether it can overcome industrial overcapacity, regulate shadow banking, manage government debts and rein in bubbles in real estate development, Ma said.

Duncan Freeman, a researcher at the Brussels International Institute of Contemporary China Studies, said the government is expected to strike a balance between sustaining growth and advancing reform.

"The fact that GDP growth remains relatively strong will strengthen the argument that China can afford to push forward with reform in a positive environment with less risk of negative outcomes for growth in the short term," Freeman said.

Stock markets in Europe, Japan and Hong Kong rose on news of the economic data.

Stronger domestic demand, which increased factory production and fixed-asset investment, was the main force behind the third-quarter growth.

The statistics bureau said investment accounted for 55.8 percent of the GDP increase and consumption 45.9 percent, but net exports dragged this growth down by 1.7 percent.

Wang Tao, chief China economist at UBS, said credit-intensive investment may weaken in the last quarter and slow infrastructure construction as well as the overall economy.

"On the export front, the recent US government shutdown and persistent uncertainties in global recovery may weigh on China's export performance in the fourth quarter," said Wang, who expects GDP growth of 7.6 percent in this quarter.

In September, industrial output rose by 10.2 percent from a year earlier, compared with 10.4 percent in August.

Qu Hongbin, chief China economist at HSBC, said the rising economic trend is likely to be maintained, but with weaker momentum, which will require policies to stress growth stabilization.

John Jullens, a partner with the consultancy Booz & Co, said that despite the rebound China's economy cannot return to double-digit growth, which means large stimulus packages that often lead to bad debt in the banking system.

He expects a more balanced growth model to be further clarified after the Third Plenary Session of the 18th Communist Party of China Central Committee scheduled for November, which will decide on comprehensive reform measures.

After this meeting, Wang from UBS expects to see the services sector open up to private and foreign entrants, the continued expansion of pensions and healthcare insurance schemes, and hukou — the residence registration system — and financial sector reforms to probably make more tangible progress.

Zhu Haibin, chief China economist at JPMorgan, said, "We expect the new leaders to lay out reform strategies in key areas such as the administrative, financial, fiscal, land and resource-pricing sectors."

That means the government may step up efforts to address major structural problems in the economy, such as overcapacity in some key industries, financial imbalances and the housing boom, Zhu said.

Fu Jing in Brussels and He Wei in Shanghai contributed to this story.

Beijing needs to be 'more active' in global security