Growth in China's manufacturing sector cooled slightly in August, a sign of decreased momentum in the country's economic recovery, according to new data published Monday.

China's purchasing managers' index (PMI) came in at 51.1 in August, down from a July total of 51.7, according to data released by the National Bureau of Statistics and the China Federation of Logistics and Purchasing (CFLP).

And a separate report from HSBC Holdings Plc and Markit Economics yielded a final PMI rating of 50.2, down 1.5 points from a month ago.

August's dip in the country's PMI numbers was the first time in six months that the official figures declined.

A pullback in manufacturing, coming as the property market slumps, adds pressure on the government to step up efforts to meet its expansion target of 7.5 percent this year.

Qu Hongbin, an economist with HSBC and one of the authors of its China PMI report, said that the growth in the Chinese manufacturing segment in August improved at the "slowest pace in three months".

Zhang Liqun, an economist at the Development Research Center of the State Council, said in a CFLP statement that the latest PMI data indicates some "downward pressure on the economy."

And "future industrial production growth may continue to drop slightly," he said. 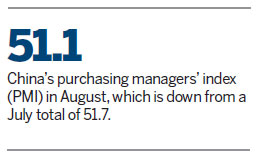 However, Zhang also said indices have managed to stay above the 50-point mark, which means the trend of consistent growth in the world's second largest economy remains.

PMI data is an economic indicator formulated from responses to monthly surveys of companies in the private sector.

The two principal producers of PMI data are the Markit Group, which calculates PMI data for more than 30 countries worldwide, and the Institute for Supply Management (ISM), which conducts research toward the US PMI rating.

A reading above 50 on the PMI scale indicates economic expansion, while a reading below 50 represents contraction.

Lu Ting, Bank of America Corp's Hong Kong-based head of Greater China economics, told Bloomberg News in a Monday interview that "the two PMIs both show that the current recovery is relatively weak and choppy".

Lu also said the Chinese government could announce some stimulus measures in the next few weeks, moves that could include greater flexibility in the re-lending quotas set by the People's Bank of China.

Official PMI measures typically produce a higher reading than the HSBC surveys due to the pool of responses and the focus of the individual data sets.

PMI measures taken by the government include responses from executives at 3,000 companies with a tendency toward larger, state-owned factories, whereas the HSBC survey works with only 420 businesses and is weighted toward smaller private companies.

The majority of the readings for the August PMI sub-indices fell, including production and new orders, but the index for business outlook climbed 2.6 percentage points to 57.9, a move that suggests some optimism for the end of 2014.

"This official PMI is a bellwether of China's largest and listed companies, so it suggests they are still moving at a steady pace," Liu Li-Gang, chief China economist at Australia & New Zealand Banking Group Ltd, said in a recent interview on Bloomberg Television.

Beijing spruces itself up for APEC summit