China's shadow banking sector, a rapidly growing but opaque part of the nation's financial system, brings benefits, costs and risks to the world's second-largest economy, according to an article on the International Monetary Fund's (IMF) IMFdirect website.

The problem is that it's hard to gauge how much added risk shadow banking poses in China due to the hazy and sometimes complicated nature of the activities found in the sector, said Barnett and Roache.

The authors note that China defines shadow banking as total social financing less bank loans. Barnett and Roache exclude equity issuance (companies raising funds by selling stock). They break down shadow banking to four major components: corporate bonds, the largest component of so-called shadow banking; entrusted loans represent corporate to corporate loans, administered by a bank; bankers' acceptances are letters of guarantee issued by a bank that its customers can use to finance a transaction; trust loans involve lending by trust companies. Unlike a bank loan, on paper the trust company just brings the borrower and investor together for a fee. 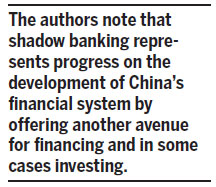 The Financial Stability Board (FSB), an international body that monitors and makes recommendations about the globalfinancial system, suggests that shadow banking in China is small. However, Barnett and Roache pointed out that the FSB takes out parts of the nonbank financial system that aren't involved in "credit intermediation".

The authors said in China it may not be clear whether shadow banks like trusts are acting as loan arrangers or whether they are lending like a bank which involves credit risk. Estimates from the IMF and CEIC, a product of Euromoney Institutional Investor, suggest that shadow banking comprises 55 percent of China's GDP. The forthcoming OctoberGlobal Financial Stability Reportuses an estimate of 35 percent of GDP by subtracting corporate bonds or nearly 20 percent of GDP, according to Barnett and Roache.

The authors note that shadow banking represents progress on the development of China's financial system by offering another avenue for financing and in some cases investing. It is also helpful for the country's households by presenting another investment opportunity which is important because of the ceiling on deposit interest rates in China.

The risk factor increases when nonbanks get involved with lending. Barnett and Roache said that traditional banks have safeguards such as capital requirements and provisions for loan losses in addition to an established regulatory process that tend to make financial institutions more accountable for lending activity.

Barnett and Roache said it appears that investors appear to have been largely protected from the losses that could come with risky lending. However, many investors may not appreciate the risk factor that occurs in such lending.