"Every American deserves access to their government and language should never be a barrier to access," said Phil Ting to China Daily.

"California has the most language diversity in the nation," said Ting, adding that language barriers for non-English speakers are pervasive.

"I agree with the idea that government agencies should provide multilingual services to non-English speakers," said Betty Yuan, a community leader in the San Francisco Bay Area.

Yuan said some non-English speakers didn't see doctors because they are unable to say where it hurts in English and they don't want to face lawsuits when they get into trouble because they can't express their ideas clearly. 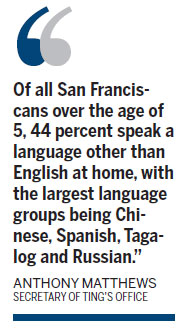 In San Francisco, more than 35 percent of the City's estimated 812,826 residents are immigrants.

"Of all San Franciscans over the age of 5, 44 percent speak a language other than English at home, with the largest language groups being Chinese, Spanish, Tagalog and Russian," said Anthony Matthews, secretary of Ting's office.

Thirteen percent of San Francisco households remain "linguistically isolated" with no one over the age of 14 indicating that they could speak English "well" or "very well", according to a report released by office of Civic Engagement and Immigrant Affairs.

Based on this situation, Ting proposed the Bill (AB) 2102 to help California provide "culturally and linguistically appropriate healthcare" to limited English proficient residents.

"Limited English-proficient patients are at far greater risk of being misdiagnosed and improperly treated for their ailments. And lack of language access in healthcare increases the use of more expensive emergency services, higher diagnostic and testing costs, and increased liability for providers," said Ting, adding that it is better for hospitals to have medical professionals who can communicate with patients in different languages.

Also, the bill requires the state to collect demographic information not only for doctors and dentists but also for nurses, physician assistants, respiratory care providers and psychiatric technicians every other year based on their ethnicity, location and also language skills in order to provide healthcare in the most culturally appropriate manner.

Under state law, every agency must have enough qualified bilingual staff and translated written materials.

However, according to information released by Ting's office, a 2010 state audit found that state agencies are not meeting the standard.In a state where more than 1.3 million residents have limited English proficiency, only 43 language access complaints were filed over a four-year period.

In its last report to the State Legislature, the California Department of Human Resources found that 77 percent of agencies served a substantial number of limited English proficiency Californians and that 80 percent had a bilingual staffing deficiency.

Except for these two bills, Ting also plans to author language access legislation each year to ensure equal rights for English learners, since he believes that the best way to help non-English speakers is to make sure that they get treated equally and fairly.