Chinese and Japanese views toward each other hit 9-year low, poll finds 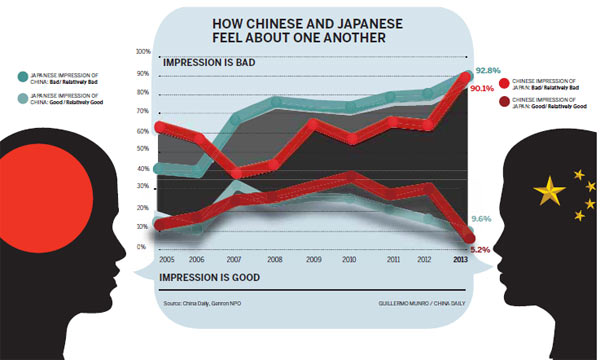 The impasse between Beijing and Tokyo over the Diaoyu Islands has badly hurt the attitude of both peoples toward their neighbor, with nine out of 10 saying they dislike the other nation, a recent survey has found.

Results of the survey, co-sponsored by China Daily and the Japanese nonprofit think tank Genron NPO, are the worst in almost a decade. They are even worse than in 2005, when Japan's then-prime minister Junichiro Koizumi repeatedly visited the Yasukuni Shrine honoring Japan's war dead, including war criminals from World War II.

Despite this mutual aversion, 72 percent of Chinese and 74 percent of Japanese see ties as "important". Corresponding figures in Chinese and Japanese intellectual groups reached 80 percent and 92 percent.

Without a breakthrough in relations, "similar surveys will find people's emotions hitting a new low in the future", said Lyu Yaodong, head of Japanese diplomacy studies at the Chinese Academy of Social Sciences.

With the Japanese government continuing to deny the existence of a dispute over the Diaoyu Islands, there will be little hope for a summit between the two to break the ice, observers said.

The two countries had agreed to put aside issues surrounding the islands as Beijing and Tokyo focused on warming up their political and economic ties over the past four decades. But recent Japanese governments have sought to change the status quo and deny the existence of a dispute, which angered China.

The findings show that 92.8 percent of Chinese surveyed hold a negative attitude toward Japan, 28 percentage points higher than last year. Similarly, 90.1 percent of ordinary Japanese have negative feelings toward China, in contrast to 84.3 percent last year.

Hu Jiping, director of the Institute of Japanese Studies at the China Institutes of Contemporary International Relations, said the neighbors are in urgent need of negotiations to break the ice and stop relations getting worse.

"It is impractical to expect the territorial dispute to be solved completely. We can only agree on provisional arrangements at the moment," Hu said.

The annual China Daily/Genron NPO poll elicits responses from all sections of society.

This year, the poll, conducted in June and July, included 1,540 Chinese in Beijing, Shanghai, Chengdu, Shenyang and Xi'an, 200 of the social elite from around the country and 802 university students and teachers at five top Beijing universities.

In Japan, 1,000 adults and 805 intellectuals, mostly with experience of China, were interviewed.

The attitudes of intellectuals in both nations are more moderate, with 52.8 percent of the Chinese group and 36.3 percent of the Japanese seeing each other in a positive way.

The biggest reason for the negative attitude is the Diaoyu Islands, with 53.2 percent of ordinary Japanese choosing it in the multiple-choice question. The number of Chinese dissatisfied over the issue has nearly doubled, from 39.8 percent last year to 77.6 percent this year.

The second major reason for Chinese dislike of Japan is that "Japan has not sincerely apologized for its aggression against China". That corresponds with the second reason for Japanese dislike of China: "Chinese criticism of Japan over historical issues".

When asked about Japan, the most common first thought among Chinese is now the Diaoyu Islands, overtaking "electronic products".

The most common answer among Japanese toward China is still Chinese food, although one-third chose the Diaoyu Islands issue and another third chose air pollution.

To solve the Diaoyu Islands issue, most Japanese chose negotiations and international arbitration. But a majority of the well-educated Japanese said the priority should be avoiding accidental military conflicts, and almost half chose "putting aside disputes and seeking common development of the disputed area".

On the Chinese side, more than half of the respondents support "consolidating Chinese control (over the disputed area) to guard the territory", while the second most supported choice was "having Japan admit the existence of the territorial dispute through diplomatic efforts".

Despite strong Chinese demand for holding onto the islands, nearly half of the Japanese surveyed said there will be no military conflict between China and Japan in the sea.

But in China, more than a third said "there will be military conflict in the future".

China and Japan have not held a summit since tensions escalated in mid 2012.

"We can see a strong demand from the Japanese for negotiations, but the biggest problem in arranging a summit lies with the Japanese government, as Tokyo denies the existence of the territorial dispute," said Hu, from the China Institutes of Contemporary International Relations.

"In that case, there will be little possibility for a summit, as such a meeting will be meaningless."

Mo Jingxi contributed to this story.

A stage set for big innovation