FM calls for new steps in fight against terror

The international community must come up with new thinking and new steps to respond to terrorism for the world's peace and security, said a senior Chinese leader at the United Nations Security Council in New York on Wednesday.

Speaking at a council meeting where a resolution on fighting terrorism was unanimously passed, Chinese Foreign Minister Wang Yi said the new trends and developments of terrorism require the council to consider new measures - including information gathering and sharing and strengthening counter-terrorism on the Internet.

"Full scope should be given to the advantages of the United Nations and relevant international institutions on such matters as establishing a counter-terrorism database and information exchange platform, so as to step up sharing of information resources and intelligence analysis," said Wang.

Wang said that "resolute measures" should be taken to stop the use of social media to spread extremist ideas, especially the releasing of audio and video materials of violence and terror.

"Internet companies and operators should exercise self-discipline," said Wang. "It is imperative to formulate as soon as possible a code of conduct for the global cyber industry."

China will host the Symposium on Countering Terrorists' Use of the Internet within the framework of the Global Counter-terrorism Forum in Beijing later this year.

Channels of terrorists' movement and financing of terrorism should also be blocked, said the Chinese foreign minister.

"All countries, particularly those adjacent to ongoing conflicts, ought to fulfill international obligations for effective border control," Wang noted. "We must enhance cooperation in financial regulation, crack down on illegal underground banking activities and block terrorist financing."

Jon Taylor, a political science professor at the University of St Thomasin Houston, said Wang's remarks mark a "turning point" for China, which will assume its natural position as one of the world's leading powers.

"His remarks reflect a realistic belief on the part of China that all methods and measures should be brought to bear, be they digital or analog, direct or indirect, in the global fight against terrorism," said Taylor.

The resolution requires nations to "suppress the recruiting, organizing, transporting, equipping" and financing of "foreign terrorist fighters". It also calls on governments to "help build the capacity of the states on the front lines of the fight", according to US President Barack Obama, who chaired the council meeting. The US holds the presidency of the council this month.

Obama called on council members to translate the items in the resolution into action. 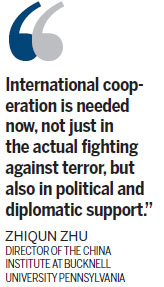 "Resolutions alone will not be enough, promises on paper cannot keep us safe, lofty rhetoric and good intentions will not stop a single terrorist attack," Obama said.

"Potential recruits must hear the words of former terrorist fighters who have seen the truth: that groups like ISIL (ISIS) betray Islam by killing innocent men, women and children, the majority of whom are Muslim," said Obama.

"Given the political pressure Obama faces at home, particularly with plunging approval numbers, it is not surprising that the US took the lead on this issue," said Taylor.

Zhiqun Zhu, director of the China Institute at Bucknell University Pennsylvania, said superpowers including US and China should enhance their mutual trust to cooperate on combating global terrorism.

"International cooperation is needed now, not just in the actual fighting against terror, but also in political and diplomatic support," said Zhu, adding intelligence sharing is one thing China and the US should be doing.

Wang in his speech cautioned that while taking action to crack down terrorism, normal religious activities should be protected.

"We should promote de-radicalization we should protect normal religious activities, promote public awareness, and give greater play to the role of local communities, thus injecting more positive energy in society," Wang said, adding that the council should adopt a "multi-pronged approach to fight the global war on terrorism".

Wang was in New York to attend the 69th session of the UN General Assembly. He will have a number of bilateral meetings with his counterparts from the BRICS, which, besides China, includes Brazil, Russia, India, and South Africa.

Experts are cautious on Modi's US trip