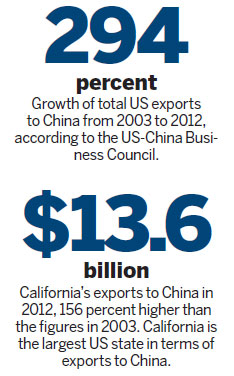 The United States should be more aggressive in competing with other nations exporting to China and aim to reclaim 10 percent of those exports by 2015, the US-China Business Council says.

The business advocacy group released two reports on Thursday which showed that, although in 2012 China remained the US' third-largest export market, purchasing nearly $109 billion in US goods that year, the US must fight harder to increase its share of that total.

In the decade from 2003 to 2012, total US exports to China soared 294 percent, an increase of nearly $81 billion. But the US' share of imports into China fell to 7 percent from 10 percent in 2000 and it "significantly" trails the European Union, Japan and South Korea in imports to China, the council said.

"As its economy and middle class continue to expand, China will continue to play a significant role as an export market for a wide selection of US goods," the group said.

The USCBC's annual report on US Congressional district exports to China said the US could increase its sales and global competitiveness while providing China with innovative products and services by regaining the 10 percent import share it last held in 2000.

The report also urged policy makers to improve the "capacity and resources" of four US trade agencies and organizations: the Foreign Commercial Service, which helps US companies find exporting opportunities in new markets; the Export-Import Bank, which provides financing to foreign buyers of US products; the Office of the US Trade Representative, a key agency focused on removing market access barriers that threaten to restrict US exports; and state and local organizations that help US companies engage in foreign markets.

Charlie Welsh, editor in chief of XportReporter, an online business-information journal which covers the export market, said the report underlines "how essential it is that more US companies look to faster-growing foreign markets like China for growth opportunities, as that where future growth will increasingly be found".

He said a recent study commissioned by investment bank HSBC Bank USA found that Northeast US-based companies that trade internationally had "robust" average profit margins. On the other hand, companies in the same region with low levels of internationalization were found to have considerably lower levels of profitability, he said. 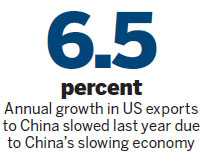 "While absolute numbers look impressive, the fact remains that US companies - particularly in the middle market - continue to let their lunch get eaten by their more proactive peers in Europe, Japan and elsewhere," Welsh said.

"American companies remain a statistical anomaly insofar as they, unlike other advanced economies, do not look to foreign markets as a substitute for lower domestic growth. That is why the US share of imports into China has fallen to 7 percent from 10 percent in 2000," he said.

The USCBC's report on US exports to China by state, showed California was the top US state exporter to China last year, with $13.6 billion in exports, a 156 percent jump from 2003 to 2012. It was followed by Texas, with exports of $10.1 billion and 2003-12 growth of 229 percent. The third-strongest state exporter was Washington, with $7.9 billion in exports for decade-long growth of 239 percent.

States seeing the greatest growth in exports to China over the decade were Alabama (1,084 percent), South Carolina (1,001 percent) and Michigan (743 percent).

Addressing the US' ability to compete with other countries in terms of imports to China, the report on US Congressional district exports to China said that China acts as a primary processing area in East Asian supply chains. This relationship accounts for "strong imports from those countries", the report said.

But it said that China's imports from the European Union - which "far outpace those from the United States" - provide a more useful benchmark for comparing the US's export competitiveness in China.

The report noted that US exports to China "remain a bright spot for US companies." It said that although annual growth in US exports to China slowed to 6.5 percent last year due to China's slowing economy, annual average growth over the last decade was nearly 17 percent.

Congressional districts in Colorado, Nevada, Ohio, Michigan, Pennsylvania, Virginia and Wisconsin benefited from rapidly increasing exports to China - including exports of manufactured goods such as electrical equipment, machinery, computers and electronics, transportation equipment and other high-end products, the report said.

US, Pakistan to start new chapter in relations