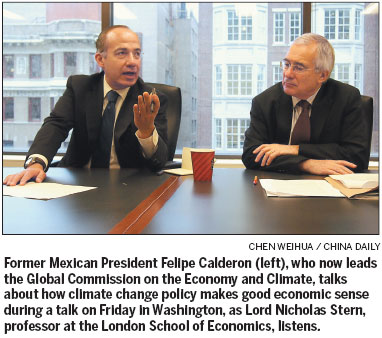 While much of the on-going climate debate has centered on the relationship between human activity and climate change, a group of government, financial and business leaders are out to convince the world that good climate policy can contribute to strong economic growth.

Former Mexican President Felipe Caldern, who chairs the Global Commission on the Economy and Climate, praised a recent Intergovernmental Panel on Climate Change (IPCC) report for providing sound scientific evidence that human activity has been a major cause of climate change. The report, released on Sept 27, warned that if governments do not take more aggressive action, the ice caps will melt and sea levels rise more rapidly.

"So scientists have made their case again. Now it's time for the economists to make their case," Caldern said in Washington on Friday.

Many people still think that combating climate change will hurt the economy, he said. "However, we think this assumed trade-off is a false statement. We believe it's possible to have economic growth, job creation and poverty alleviation while fighting climate change," said Caldern, who presided over the UN climate conference in Cancun in 2010.

The New Climate Economy project launched by Caldern's commission is expected to produce a report examining how stronger economic performance can be supported by good climate policy. The report is expected to be ready by next September in time for the gathering of world leaders at the United Nations summit in New York.

Zhu Yunlai, president and CEO of the China International Capital Corp, serves on the commission, while China's Tsinghua University along with six other research institutes in the world will participate in the study.

Caldern believes the report will be relevant to decision makers in both governments and businesses. "We have talked about emissions a lot so far, probably it's time to talk about profits and revenues, job creation and economic growth associated with a responsible policy related to climate change," said Caldern, now a fellow at Harvard's Kennedy School of Government.

Recognizing that climate change is still a divisive issue in the United States, Caldern believes the report will make a compelling economic case, even for those who ignore and deny the scientific evidence of man-made climate change.

Nicholas Stern, chair of the Grantham Research Institute on Climate Change and the Environment at the London School of Economics, described the urgent need to decarbonize energy by the second half of the century in order to avoid a catastrophic temperature hike of 3.5 to 4 degrees Centigrade by the end of the century or beginning of next century. That kind of temperature rise has not happened in the last 3 million years, according to Stern, lead author of the 2006 Stern Review on the Economics of Climate Change.

"That is an enormous challenge, but it's one full of opportunities," said Stern, who is vice-chairman of the Global Commission on the Economy and Climate.

Stern, who goes to China every year to consult on China's environmental development, feels encouraged by the intense policy debate and transition taking place there.

Chinese leaders, including President Xi Jinping, have made it clear that the current growth model of a heavy carbon footprint is unsustainable. China's 12th Five-Year Plan (2011-15) has emphasized a transition to a more environment-friendly economy.

A nationwide poll in China shows that 93 percent of Chinese said they are aware of climate change. The figure is higher than 62 percent in the US and 75 percent in the UK.

Stern, who has close contact with Chinese policy makers, said discussion about the 13th Five-Year Plan (2016-20) has already begun and will intensify in the coming years, focusing on areas that China and other countries want to discuss - the relationship between growth and climate responsibility.

"China approaches issues rather more analytically often and has more of a long-term perspective than other countries," said Stern.

Caldern said he was aware of the challenges facing China, citing the serious pollution in Chinese cities.

Acknowledging that the Chinese government has adopted initiatives to reduce carbon emissions, Caldern said those efforts need to be reinforced given the size of the Chinese economy.

In a joint op-ed piece for Project Syndicate two weeks ago, Caldern and Stern said countries at all stages of development are pursuing new patterns of economic growth that take climate into account.

"China has placed the industrial development of green technologies at the top of its agenda," they wrote, citing also the examples of Germany, South Korea, Mexico, Ethiopia and Brazil.

Investment week kicks off in Dallas