"Let's drink a lot of Moutai together. Let's make this really work."

That is one bonding experience that the US and China can do to improve their relationship, said one participant at the 10th annual Chinese Institute Executive Summit in New York.

Panelists at the meeting on Friday - entitled The Chinese Dream & The American Dream - focused on how a new era of US-China relations can be constructed at a time of strong Chinese economic activity, and how the growth in consumption is trickling down to lower-tier cities. The session was co-organized by the New York-based China Institute with the Cheung Kong Graduate School of Business (CKGSB) in Beijing.

"Despite what some naysayers may believe about China's rise as a global power, and that it poses an economic threat to the United States, the fact remains that the US is a major beneficiary of Chinese growth," said Greg Marchi, chief representative of CKGSB, in opening remarks. "China currently represents the $250 billion market for US companies and provides a huge growth opportunity with its rising middle class as it pushes for its own economic reforms in the Chinese dream."

Academics and business leaders on the panel stressed that the US-China relationship is vital to the rest of the world. "This relationship - from my perspective and that of my colleagues at Harvard - there is no more important relationship," said F. Warren McFarlan, a Baker Foundation professor at Harvard Business School. 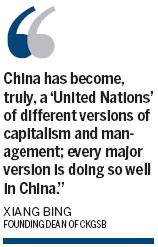 Tom Easton, the US finance editor at The Economist, said that through his work he found that China and US shared more in common than people realized. There are different economies in China, he said, and it is challenging to "get things done" in an often "murky" environment, so one needs intermediaries. He said that people viewed that as a flaw in China, but once he moved back to the US, he said he found that the financial system was just as murky and intermediaries were just as necessary.

Easton said he came to the conclusion that "there are no two countries that are in some ways closer in thought and in spirit than China and the United States."

He echoed sentiments expressed by William Owens, chairman of AEA Investors Asia, who stressed a relationship based on trust: "Let's hug each other and understand. Transparency and trust. Let's drink a lot of Moutai together. Let's make this really work."

Xiang Bing, founding dean of CKGSB, reflected on why China's economic model is a successful one. "China's own economy [is] not dominated by any model of capitalism or management. In the US, it's the American model. In Japan, it's the Japanese model. In UK, it's the British model. In China, no model is dominating," he said. "China has become, truly, a 'United Nations' of different versions of capitalism and management; every major version is doing so well in China."

Xiang said he is positive that China's new leadership will continue to build on opening the economy to more reforms because it is in the best interest of China to do so.

China's growth has quickly trickled down to consumers, who are constantly evolving in their tastes and buying preferences, the panelists said. People are now looking for security in their products, said professor Sun Baohong, who holds the dean's distinguished chair of marketing at CKGSB. They are looking for things "beyond functional," something they can link to their lifestyles.

The panelists said China's increasing consumption of goods could in large part be attributed to the rise of second-tier and lower-tier cities that have emerging populations, as well as new infrastructure and investment opportunities.

Reform to dominate talk at plenum