At home with change 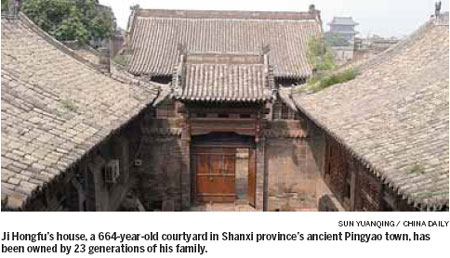 An innovative project fusing the private, government and NGO sectors aims to go beyond restoring ancient Pingyao's major structures to include its residences, as they contain the town's most important heritage - its people. Sun Yuanqing reports.

Ji Hongfu was born with a priceless asset - his house. It has since become the 39-year-old's greatest liability.

Twenty-three generations of Ji's family have dwelled in the 664-year-old courtyard in Shanxi province's ancient Pingyao town. The structure survived the family fortune's ups and downs over the centuries. A history of clan prosperity is evident in the spacious layout, exquisitely sculpted windows and family motto inscribed on the gate.

But this past glory is also faded glory. While the exterior remains resplendent, the interior is crumbling at an exponential pace, Ji says.

The erosion-resistant pillars are eroding. The roof leaks. The walls are disintegrating.

"It's not easy to live in," Ji says. "But we don't have the money or expertise to fix it."

Ji is among hundreds of residents who aspire to maintain their properties in the UNESCO World Heritage site that private investment has propelled to rank among the country's top tourist destinations.

That's where a new architectural heritage-protection model unlike any in China comes in.

Its backbone is the partnership of the private sector, government and nonprofit Global Heritage Fund.

"But they've been essentially neglected. We'll probably lose them forever if we don't act now."

Ji Taiping believes such residence's disappearance would be tragic. He points out Pingyao's future will be determined by what its ancient houses contain - its people.

Pingyao was settled in the Western Zhou Dynasty (c.11th century- 771 BC) and expanded to its present scale in the Ming Dynasty (1368-1644). It became the country's financial center during the Qing Dynasty (1644-1911), when it housed 20 financial institutions - more than half the nation's.

It was the headquarter of the country's first bank, Rishengchang, which controlled about half the national silver trade in its golden age.

Pingyao's architectural legacy was largely built upon this commercial prosperity.

The city remains among the world's best-preserved. The city wall is the crown of its imperial history, but its jewels are the more than 3,700 ancient houses studding the 2.25 square kilometers the bulwark sheaths.

However, the tourist throngs who come to marvel at the architectural treasure trove have inadvertently brought tarnish to the private homes as some locals renovate their houses into larger hostels to make money.

Others simply leave their houses to decay because ancient structures' renovations cost about twice as much as modern concrete buildings'.

Senior official at Cosco under investigation