Houston artist Wily Wang, a sculptor trained at the prestigious China Central Academy of Fine Arts in Beijing, has created numerous art works for public spaces from China to the US during the past 50 years. Now he is donating his major art works that are not in private collections to the public and is seeking to build a museum in the Houston area to exhibit them.

On Tuesday in Houston, Wang announced the creation of the Willy Wang Foundation, a non-profit organization, with foundation board member Heather Hwang and foundation supporter Gloria Chiu. The foundation will focus on raising money to build the museum.

The foundation has only eight board members now; Willy Wang and Asia Society Texas Center Chairman Charles Foster are its co-chairs.

Hwang said the museum will display Wang's art and other artists' work, and provide a workshop to teach students and facilitate art discussion.

Wang said he considered various locations for the museum and decided on the Houston area where he has been living since the early 1990s. His art donation will include more than 400 pieces, including more than 50 sculptures, many oil paintings, sketches and works through other media. 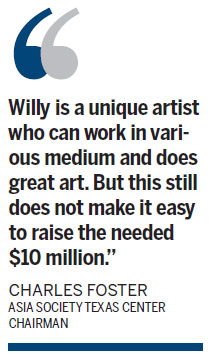 Most of Wang's art works show his highly skilled talent of depicting reality, but he also has created some modern-style semi-abstract sculptures. Wang said he hopes to leave his work to the next generation as a connection point for the dialog between traditional art and modern art.

Foundation co-chair Charles Forster did not attend the announcement but talked to China Daily about his involvement with the foundation.

"Willy is an old friend and I knew him since he first came to Houston. I helped him on a number of public projects in Houston, such as the George Bush memorial and the Confucius sculpture. He has a great body of work and I am always a great admirer of his art. I think it's a wonderful idea to put his large body of work somewhere as a permanent collection," he said.

However, Foster thinks building the museum will be a daunting task based on his own experience.

"Willy is a unique artist who can work in various medium and does great art. But this still does not make it easy to raise the needed $10 million," Foster said.

He said that Wang enlisted his help because he successfully raised more than $40 million to build the new Asia Society Texas Center, which was dedicated in 2013. Foster said that project took him 17 years to complete. "I know how difficult and time-consuming it can be," he said.

As its co-chair, Foster said he has been giving the foundation advice, including seeking public support. "This is where the group's focus is right now," he said.

Wang has donated his time freely to cultivate a community of artists and art lovers of all ages for years, and this helped him to gain a core group of supporters for the project, which Foster said he considers "crucial" for its success.

Wang will be the recipient of the Outstanding Achievement Award at next month's gala hosted by the Asian Pacific American Heritage Association. The award recognizes both Wang's artistic achievements and his years of community service.