US considers more easing of visa policy for Chinese

The United States may further ease its visa policy for Chinese tourists, a move welcomed by tourists and travel agencies in China and the US.

Arne Sorenson, a member of the President Barack Obama's Export Council, said recently that the US is considering a more progressive visa policy for Chinese tourists, including a possible visa waiver for the second time a Chinese visits the US.

"I think it is a wise decision for the US government because such changes will greatly encourage more Chinese to visit the US," said Xu Nan, an official in Beijing, adding that the complicated visa application process caused her to give up traveling to the US.

"It's overall a friendly gesture," Xu said. "The strict visa policy used to block a lot of Chinese from traveling to the US; it is unfair for them. If the US government can actually provide a visa waiver for frequent visitors like me, Chinese citizens can better understand a real image of the US through their own eyes."

More than 1.8 million Chinese visited the US in 2013 and spent about $9.8 billion, a 12 percent increase from 2012, according to a recent US Commerce Department report.

Chinese tourists are "one of the top spenders", said Renee Hartmann, co-founder of New York-based China Luxury Advisors. "I think most people in the US realize the importance of the Chinese travelers. They are growing very rapidly and the number is going to triple by 2017," she said.

Hartmann said such an increase would help in various sectors in the US, including shopping, hotels and dining, so there will be a "huge impact on the tourism perspective". 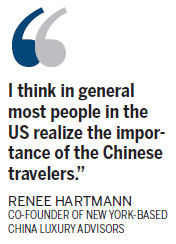 "We are pleased to see any effort of the government to ease the restrictions to allow more Chinese tourists to come to the US," Hartmann said. "The more we can ease visa policy, the more it is going to contribute to the US economy."

The number of Chinese tourists to the US experienced a sharp increase after China gave the US "approved destination status" in 2007. The number increased more than 60 percent in the first year after then US ambassador to China Gary Locke simplified the visa process in 2012.

In a newly released report from the China Tourism Academy, the US ranked as the second most popular destination for Chinese tourists in 2013.

"The rapid growing number of tourists from China to the US has influenced the local tourism market," said Eric Zhang, general manager from Dollar Travel & Charter Inc in Burlingame, California. He said because of the huge number of tourists in big cities like Los Angeles and San Francisco it is getting harder for travel agencies to book hotels.

"Local hotel managers used to ask us to bring more tourists to them, now it is our turn to ask them," Zhang said.

Zhang also said that there is a huge shortage of bilingual guides in the US travel industry, and that fierce competition in the industry along with the increasing number of Chinese tourists are putting pressure on local travel agencies.

"I think more individual tourists will arrive and lots of people are trying to rent cars for driving," Harmann said. "It shows how Chinese traveling in the US is going to change, so the impact on the US economy will be broader than it has been."

US not edged out of Latin America: State

US considers more easing of visa policy for Chinese