As Cheetah Mobile Inc's first day as a US publicly traded company drew to a close, its stock hovered at less than 1 percent above its IPO price.

But that didn't make the experience of going public on the Big Board - raising $168 million - any less "wonderful" for CEO Sheng Fu.

"We're definitely happy with our IPO," the Internet security company's CEO said in an interview Thursday at the New York Stock Exchange. "It doesn't matter if the stock goes up or goes down in the next few days. It's more important for us to focus on our business to make sure that we have a good product for our user and that we execute our growth plan and business plan." In the long run, he said, "that's what the investor is looking for."

The Beijing company - a spinoff of software maker Kingsoft Corp whose systems are used in smartphones and personal computers - said 12 million shares were sold at $14 each, near the high end of the marketed price range of $12.50 to $14.50. Managers of the offering had an option to sell up to 1.8 million additional shares to meet demand.

Fu, speaking through CFO Andy Yeung who acted as a translator, said the modest start was less important than what going public in the US financial capital represented: "Our goal is to become a first-tier mobile Internet company," Fu said. "Mobile and user growth makes our company attractive to investors globally." 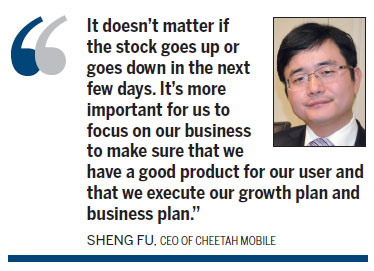 Cheetah Mobile's applications had 362 million monthly active users as of March, up 80 percent from a year earlier, according to a regulatory filing.

"Despite a very choppy market we had a very successful IPO," Fu said. "On the roadshow, we met with investors and they showed tremendous interest in our company."

The IPO came two days after Chinese e-commerce juggernaut Alibaba Group Holdings Ltd filed to go public in a US IPO that could be the largest ever, possibly exceeding $20 billion, and continued a flurry of IPO filings by Chinese technology companies. On Friday, online tour-booking website Tuniu is expected to hold an IPO valued at $120 million on the Nasdaq Stock Market. Three weeks ago, Weibo Corp, the Alibaba-Sina Corp-owned Chinese micro blogging service, raised $285.6 million in a Nasdaq IPO while real-estate listings website Leju Holdings Ltd raised $100 million in an NYSE initial offering.

Despite the crowded, fiercely competitive Chinese mobile technology field, Fu said the country has untapped potential. He cited the company's user base growing to more than 221 million in the first quarter of this year from fewer than 50 million a year earlier. The company's 223 million mobile users outside China also show the company is ready to step up its going-global objective, he said.

"The mobile Internet can make the world better and (create) a more equal playing field for a global company," Fu said. "In the past, a lot of Chinese companies would copy the business model from the US. But today, China has some innovative models that some US companies may not even have." He cited Alibaba's differences from Amazon and eBay, the US counterparts with which it is most often compared.

"The China Internet space is a very large, full market," Fu said. "It is large enough to grow very large, successful companies. At same time it is a place with fierce competition in the Internet space. A lot of these companies have developed very innovative business models."