On Monday in New York City, 25-year-old graduate student Cecily McMillan was convicted of a felony for elbowing police officer Grantley Bovell in the face when he led her out of the Zuccotti Park in downtown Manhattan on the night of March 17, 2012. New York police were trying to clear protesters in the park that day, the six month anniversary of the Occupy Wall Street (OWS) movement.

McMillan said she only swung her arm instinctively after her right breast was grabbed from behind. Photos of bruising to her chest were shown during the trial on Monday.

However, the judge Ronald Zweibel ordered McMillan to be held without bail until final sentencing on May 19. She was handcuffed and taken to Rikers Island, a New York City jail in the East River.

Supporters for McMillan shouted "shame" and refused to leave the courtroom when the verdict was read. Under the law, McMillan could face up to seven years in jail.

Although I was not a witness in the McMillan case, but police brutality was often when I followed closely the OWS in New York City in late 2011. I was one of the few people on the Brooklyn Bridge not handcuffed by the cops because we had an official press pass. A New York Times freelancer was cuffed and taken away with some 700 protesters on the bridge when she failed to show a press pass.

On several occasions at Zuccotti Park, also known as Liberty Plaza Park, and areas around the Wall Street, I saw several police officers jump on non-violent protesters, push them to the ground and cuff them.

Those moments have forever changed my impression of the NYPD and those images have been lingering in my mind for the past few years. 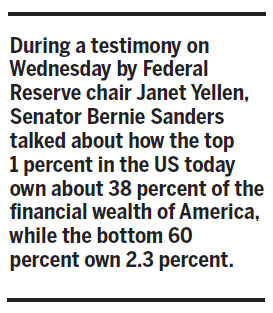 The nightmarish police brutality of those days also included the pepper-spraying of peaceful OWS protesters by NYPD officers, as well as officers at the University of California, Davis.

I was certainly not alone. At an OWS photo show at the South Street Seaport Museum Manhattan in late January 2012, several photographers talked about police brutality and proved it with their exhibits.

The OWS movement was protesting against social inequality with the top 1 percent of the population owning an increasing proportion of the wealth. The outcry, which was largely ignored by many mainstream US news media at that time, has increasingly become a concern in the US today.

During a testimony on Wednesday by Federal Reserve chair Janet Yellen, Senator Bernie Sanders talked about how the top 1 percent in the US today own about 38 percent of the financial wealth of America, while the bottom 60 percent own 2.3 percent.

Yellen expressed concern over the growing inequality, adding that she thought it deserved more attention from policy makers.

While the OWS movement did not succeed in a way as expected, some Americans have clearly learned from its experience and the experience of the Arab Spring.

A group called Operation American Spring, led by retired Col. Harry Riley, is planning to gather millions of people to demonstrate on the National Mall in Washington on May 16. Their goal is to voice their disappointment at the leadership and to oust politicians they deem corrupt, everyone from President Barack Obama to House Speaker John Boehner.

So whatever the final sentencing of McMillan is on May 19, history will show that she was not guilty, and the OWS movement should also be rectified.

The author, based in Washington DC, is deputy editor of China Daily USA. Email: chenweihua@chinadailyusa.com.