An anti-monopoly investigation of Microsoft Corp in the Chinese market is underway, but an analyst with a New York-based research and investment firm said the probe is not likely to "move the needle on [Microsoft's] business outlook" in China.

"China is continuing to have a more contentious relationship with United States tech companies," Ives said Tuesday in an interview with China Daily.

"If you talk about it from a government perspective, a lot of these US tech companies, Microsoft included, are getting caught up in the mix."

"Microsoft is almost its own separate issue too as there have been a lot of longstanding issues with China: piracy, Windows 8, etc," he said.

"But I think there is a broader US tech issue in China too."

A Chinese antitrust regulator said on Tuesday it is investigating whether Microsoft's business in China constitutes a monopoly, citing a specific focus on Microsoft's Windows operating system (OS) and its Microsoft Office software suite. 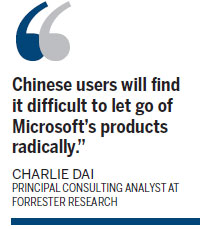 The State Administration for Industry and Commerce (SAIC) said in a statement that it received reports of compatibility and file verification failures related to two of Microsoft's flagship products.

The complaints stem from the fact that Microsoft did not disclose enough product information for those two items.

Microsoft is also facing tied-in sale investigations, the SAIC said, but Microsoft has not yet been accused outright of any wrongdoing.

The government also is investigating Microsoft executives in China, including a vice-president, according to the SAIC statement.

On Tuesday, in an email to China Daily, a Microsoft representative wrote: "We aim to build products that deliver the features, security and reliability customers expect, and we will address any concerns the government may have."

Microsoft does not disclose financial information about its business in China, but the company's CFO told the Wall Street Journal that the company is dealing with "challenging conditions" in the world's second-largest economy because of a "weak business environment".

Ives, with FBR Capital Markets, said that Microsoft would clearly prefer positive selling conditions in China, but when you take a step back, China is only "a small piece of the overall pie from a relative revenue perspective".

"It's going to be a continued soap opera that we're going to see play out over the coming months, but the bark could be worse than the bite," Ives said. "But it feels like there are a number of issues going on."

Charlie Dai, principal consulting analyst at Forrester Research, said the investigation of Windows and Office could affect Microsoft's business in China in the short run, but it may be hard to impact the company's long-term earnings.

"Chinese users will find it difficult to let go of Microsoft's products radically because such a move will impact their business continuity," he said. 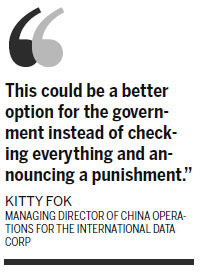 Dai said Microsoft's attitude toward the probe would play a critical role in the verdict.

SAIC is one of three antitrust watchdogs in the country, along with the Ministry of Commerce and the National Development and Reform Commission (NDRC).

Microsoft is the second US hi-tech multinational being examined for its monopoly status in China.

Qualcomm Inc, a California-based mobile phone chipmaker, is under investigation by the NDRC to determine whether it abused its dominant market position to charge high patent fees.

The investigation is in the process of being completed, and Chinese officials told China Daily a decision is due soon.

Kitty Fok, managing director of China operations for the International Data Corp, said regulators should consider giving guidelines to the multinationals for them to run self-evaluations.

"This could be a better option for the government instead of checking everything and announcing a punishment," she said.

Xu Wei contributed to this story.