Overcoming old cultural stigma attached to a career in uniform

For China-born William Wang, who just graduated from West Point, serving in the military is a way of showing his interest in "the prosperity of this nation".

Aside from "the sense of purpose, pride and discipline" of the military, what also attracted Lt Wang to the military was the opportunity to promote Chinese Americans' voice in US society, which he thinks is disproportionately weak.

Chinese Americans, he said, "typically favor careers in medicine, business, law and academia". But, he added: "their cultural stigma about military service diminishes their social leadership and political influence."

With Asian-American enrollment in US military academies steadily on the rise over the last four years, the percentage of Asian-American students peaked with the class of 2017.

"I think it's a good thing for Chinese-American community because they'll have a voice in the military and the government," said Kytoh Li of Flushing, New York, who was accepted to the US Naval Academy at Annapolis this year.

Li was nominated by Congresswomen Grace Meng to both the US Naval Academy and the Air Force Academy and was accepted at both. "I love flying," he said. "Surprisingly, the Navy has more planes and cooler planes than the Air Force, to be honest. So I chose to go there." 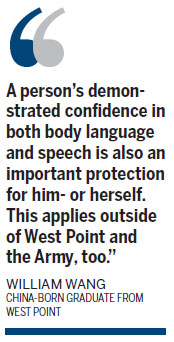 Li calls more Asian Americans in military academies "a great opportunity". "They are opening up to diverse groups of people. It exposes the military in general to all these different cultures, getting different perspectives."

Julia Hsu, 19, also from Flushing, was accepted into a five-year program at West Point this year. "Everybody has an equal chance of doing anything here," she said. "It's getting really diverse, which is good, so there's no racism."

Hsu said she would probably major in engineering and wasn't worried at all about the possibility of being sent to the frontlines in battle.

"I did think about it, but I'm not scared," she said. "My parents still worry about it." Both of Hsu's parents are from Taiwan.

Hsu also said there's nothing inconvenient about being a girl joining the army. "It's based on what you want, and you should go for it," she said. "Girls are just as strong as boys."

Wang feels that too few Asian-American cadets were willing to strive for key leadership positions during his years at West Point, where he served as commander for 300 cadets during basic training and command sergeant major for a 1,110-cadet regiment during senior year.

Wang, who immigrated to the US from China with his family at the age of 12 and graduated valedictorian of his Virginia high school class, said that thanks to enhanced protection, racial discrimination against minorities was no longer a serious issue at West Point.

"A person's demonstrated confidence in both body language and speech is also an important protection for him- or herself. This applies outside of West Point and the Army, too," he said.

"Making friends from other races is not that difficult, as long as you are open and willing to do so," he said.