Beijing and Washington should "take good care of each other's concerns", the foreign affairs chief of China's top legislative body said and warned of the consequences of miscalculation.

Fu Ying, a veteran diplomat and former Vice-Foreign Minister, also said that the US pivot to the Asia-Pacific region has given many Chinese people the impression that "the Pacific Ocean is no longer an ocean of peace". Washington has consistently claimed that the pivot is not about containing China.

"The absence of mutual understanding and trust may make many problems and differences look larger, causing more turbulence for the relationship," the chairperson of the Foreign Affairs Committee of the National People's Congress said at a seminar in Beijing on Wednesday.

Fu indicated that the relationship is like a coin with two sides, it is also one of "great complexity and difficulty".

The two governments have established more than 90 platforms for dialogue, covering various topics. There are even wider exchanges at the academic level and millions of their citizens have visited the other country for business, pleasure or education.

Their cooperative agenda "enjoys the broadest scope ever", and both are indispensable parties to "the international governance and the reform of rules", she said.

Fu described Washington's seemingly uneasiness about the changing world as "anxiety", while China's GDP last year surged to more than half that of the US. 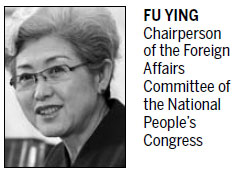 She dismissed allegations that China's problems with some of its neighbors stem from unavoidable tension as a new power rises.

"I'm afraid it is a traditional belief of the West: 'a nation gaining strength is bound to try to take power from the hands of others'," she said.

Liu Xuecheng, a researcher on US studies at the China Institute of International Studies, said the tension side of the relationship is prompted by "the clash between China's self-confidence and US strategic anxiety".

Wang Rongjun, an expert on US strategic studies at the Chinese Academy of Social Sciences, said the two sides "share a pragmatic view on the relationship", and the inflammatory allegations against China made by some US lawmakers are not as important as what the US government has said and done.

Fu said building a new relationship model between two major countries - the consensus made by the leaders of both countries last year - requires a "patient and appropriate treatment of every matter we encounter" and "the priority now is to consider seriously what we can do together."

Real names now required for WeChat and other IMS