Pay gap still wide between men and women despite improvements

"Women hold up half the sky" is a proclamation made by Mao Zedong in 1968. It is widely held, in the East and the West, that raising women's social status was one of Mao's legacies left for China.

After almost half a century, gender gap in earning is still shocking despite the improvement of women's status in general.

According to three national surveys by the National Statistics Bureau, economic inequality between men and women has grown in the last two decades.

"More efforts are needed to give women more opportunities and resources, to improve their abilities in administering national and social affairs, and to help them play a more important role in cultural development," Song Xiuyan, vice-president of the All-China Women's Federation, said at the opening ceremony of the 11th National Women's Congress in 2013.

The congress, which is held once every five years, was expected to draw up a blueprint for the economic advancement of Chinese women in the next five years.

"We will try our best to promote gender mainstreaming in the policymaking process," she said.

Though promoting gender equality was written into the Party's administrative program at the 18th CPC National Congress in 2012, the ever-widening income gap remains a problem.

Male-female income difference exists not only in China.

In a women's conference in Silicon Valley, Former US Secretary of State Hillary Clinton lamented the pay gap between men and women in February and said that she may make gender inequality a main theme in her likely 2016 presidential bid.

Yang Jingfei, an accountant in Shanghai, is a 28-year-old woman who has worked for six years. She got pregnant last November.

"My health situation, that I face great risks of miscarriage, does not allow me to burn the night oils at work like before, and I physically can't go on business trips. All these make it harder for me to get better professional opportunities - I get less bonus, lost a promotion chance," she said.

"My husband whom I met at college was not a better student as I was, but he has advanced so much in his career. I feel this is a general path for women, family becomes the first for us when we get to a certain age."

Zhou Haibin, an official with the International Labor Organization, said in an interview that there are many reasons resulting in gender inequality, one of them is discrimination.

"The idea that men are the breadwinners and women are in charge of domestic affairs is more or less entrenched in people's minds, leading to inequality in employment, promotion and income," said Zhou. "The fact that women take greater responsibility in bearing, giving birth to and raising kids than men gives employers the preference to hire men or to give men higher wages and more promotion opportunities. In this sense, women need strong support networks to tough things out," he said.

In the private sectors and society, there have already been many programs helping women go through the process.

Inspired by Facebook Chief Operating Officer Sheryl Sandberg's book, Lean In: Women, Work and the Will to Lead, a group of female professionals in Beijing are organizing regular seminars and networking events to help other women in the workforce learn new skills and encourage self-growth.

One of the organizers Charlotte Han, 27, said that the meetings are an effective way to acquire social resources as participants are all open, sharing and helpful.

"It helps me to see things out of the box. It is a support network outside of the workplace and family," she said. "I also have access to a career mentor."

For women who start their own businesses, they also face great challenges. 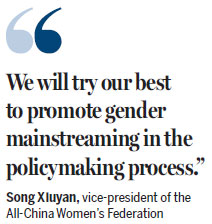 Foreign investment restrictions
to be cut

Taking the fight to the terrorists

China: Action to be taken if deadly bombing happens again