A group of Chinese and Americans are trying to find ways the news media can play a better role in building the new type of major country relationship, a concept agreed upon by President Xi Jinping and US President Barack Obama in June last year to defy the historical precedent of a rivalry between a rising power and an existing one.

A two-day forum that will end Monday afternoon has drawn media practitioners, scholars, former government officials and lawmakers from the two countries to engage in extensive discussions in everything from journalism education and news reporting to the impact of new media and the differences between the two countries' media landscapes.

Cheng Siwei, former vice-chairman of the Standing Committee of China's National People's Congress, the country's legislature, said on Sunday that he hopes the exchanges at the forum would help build mutual understanding, eliminate misunderstanding and promote mutual respect and mutual trust.

Cheng called on journalists to observe professional ethics. He said that the media in both countries have their problems. "The US news media's coverage (of China) is sometimes not objective and often ideological. They tend to define the overall picture with just a few sporadic incidents. This needs to improve," Cheng told China Daily on the sidelines of the meeting, entitled A New Type of Major Country Relations and the Roles of Media.

Cheng said that the Chinese news media should improve their credibility and appeal to the general public.

Robert McFarlane, former US national security advisor to President Ronald Reagan, believes that journalists should pay more attention to the context given the diverse culture and history of the two countries.

"(For) the media, context is everything," he said in a keynote speech.

He described the two-day forum as offering American participants an opportunity to understand the most challenging and complex political, social and economic transformations ever attempted in human history. "Be grateful you are a journalist, be honest and truthful," McFarlane said.

Patrick Ho, deputy chairman and secretary general of the China Energy Fund Committee, which organizes the forum, said mutual trust and respect come from better understanding of each other's history, culture and society. 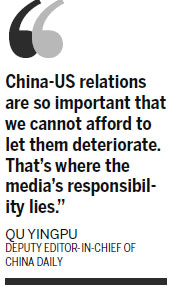 Noting that the challenges of the task should not be underestimated, Ho said that's why his committee was organizing such a forum, the sixth Sino-US colloquium organized by the committee over the last four years, but the first focusing on the role of the media.

"Because we believe dialogue is the only means through which issues can be settled and mitigated," he said.

Ho, a former Secretary for Home Affairs in the Hong Kong Special Administrative Region government, believes many Western observers, including US policy makers, still got China wrong on many issues after China opened up to the outside world.

"We believe media play a pivotal role to communicate, to bridge nations and peoples, and to facilitate mutual understanding and trust," said Ho.

He used an historical comparison to describe the non-aggressive nature of the Chinese people. Quoting Julius Caesar's words "I came, I saw, I conquered", Ho said the words for Zheng He, a Chinese explorer during the early Ming Dynasty (1368-1644) were "I came, I saw, I made friends, and I went home".

Amos Gelb, founder and director of the Washington Media Institute who has worked in several mainstream media organizations and taught at several universities, said the media forum was vitally important.

"To be honest, I would say that the media on both sides are not doing a good enough job," he said, stressing that both sides should take this opportunity to have real conversations and not be too polite.

"There are two different views of the world," said Gelb.

Quoting Winston Churchill's words of calling the UK and the US two people divided by common language, Gelb said he believes China and the US have mutually incomprehensible cultures that people don't understand.

He said people need to do a better job in trying to see the world through the other side's eyes. "China is not going to go away, neither is the US," he said.

Qu Yingpu, deputy editor-in-chief of China Daily, suggested that the media in both countries should abandon the zero sum game and instead look for ways of cooperation which will benefit both sides.

"China-US relations are so important that we cannot afford to let them deteriorate. That's where the media's responsibility lies," he said.

He also said news media should avoid the kind of "easy and lazy journalism" that often uses labels to generalize. "Vice versa, you find the same thing in China," he said.

"So I hope the media in both countries think deeply and responsibly," Qu said.

Many voices call for end to HK protest

Brazil's Rousseff to face Neves in rival in runoff

Some protesters in HK decide to withdraw