The upcoming official US trade mission to China could bring opportunity for more bilateral cooperation in both business and energy, said US Energy Secretary Ernest Moniz.

"There will be some strong interaction with very senior government officials in Beijing, and there will be everything from the world climate issues to some of these business issues for the relationships to flourish," Moniz said at the US-China Business Council in Washington on Monday.

The business development trade mission, led by Moniz and US Secretary of Commerce Penny Pritzker, will take a delegation representing 25 American companies to Beijing, Shanghai and Guangzhou from April 12 to 17.

Moniz expects the mission to build up a "robust" partnership, adding he was "confident in what the US is doing in the government-to-government efforts, and also the capabilities that these companies will bring to China with innovative solutions".

"It's a variety of high-level interaction," said Moniz, a former professor of physics at MIT.

Highlights of the mission will be the US operations in China for Smart Cities-Smart Growth products and services, such as smart buildings, green data centers, carbon capture utilization and storage, energy efficiency technologies, clean air and water technologies, waste treatment technologies, smart grid and green transportation, according to the White House.

Pritzker said previously that the visit would engender "an opportunity to facilitate greater cooperation between the governments and private sectors in the United States and China".

"We know that China has energy needs that our firms have the goods, services and expertise to address," she said. "Through this mission, we hope to forge deeper ties that will strengthen the bilateral relationship between the world's two largest economies."

Moniz also said this mission would be a "remarkable consolidation" to help expand China-US clean energy cooperation, a joint commitment made last year.

During Obama's visit to Beijing last November, the two heads of state jointly announced that China and the US would work together to meet both countries' post-2020 climate targets.

China, the world's largest investor in low-carbon energy with an investment of about $90 billion last year, stated its goal of peaking CO2 emissions around 2030 and the intention to try to peak even earlier, and increasing its non-fossil fuel share of all energy sources to around 20 percent by 2030, according to a report. 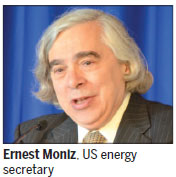 The US, the second largest investor in clean energy with more than $50 billion, released its national commitments to curb heat-trapping emissions by 26 percent to 28 percent below 2005 levels by 2025.

Sarah Forbes, a China expert at the World Resources Institute, said "high-level involvement, open and equal partnership and well-supported collaboration" are the hallmarks of climate action cooperation between China and the US.

"It's a long-running relationship that has delivered concrete, positive results," she said. "Both countries are making progress."