A Chinese advocacy organization has filed a friend of the court brief with a federal appeals court before a hearing next week to reverse an injunction a federal judge in Texas placed on President Barack Obama's immigration executive action.

The injunction was imposed by US District Judge Andrew Hanen in February to block the president's executive action, which is expected to protect roughly 5 million undocumented immigrants in the United States from deportation.

Twenty-six states, led by Texas, convinced the judge that they would suffer financial burdens if the relief programs were implemented, as the immigrants would be issued work permits and driver's licenses and be able to apply for federal benefits after meeting certain requirements, like passing a criminal background check. They also argued that the president failed to follow required procedures for changing federal rules.

"The president is abdicating his responsibility to faithfully enforce laws that were duly enacted by Congress and attempting to rewrite immigration laws, which he has no authority to do," Greg Abbott, at the time Texas attorney general, said in a statement in December. Abbott, a Republican, is now the governor of Texas.

The US Department of Justice has appealed the judge's ruling to the 5th Circuit Court of Appeals. A hearing is set for April 17.

Immigrant rights groups are optimistic the injunction will be lifted for DACA and DAPA to be implemented later this year. Some organizations already have begun planning to respond to the anticipated need to provide immigration services, according to the CAA release.

According to the Center for American Progress, a public policy research and advocacy organization, the president's executive action will raise an additional $3 billion in payroll taxes in the first year, and $22.6 billion over five years, as workers and employers get on the books and begin paying taxes for the first time.

The White House Council of Economic Advisors also projected that DACA and DAPA implementation will decrease federal deficits by at least $25 billion over the next 10 years with higher labor force participation and increased wages.

In California, immigrant rights leaders are asking state legislators to take leadership on immigrant integration by advancing a state budget proposal - One California - to provide education, outreach, and assistance for citizenship, DACA and DAPA, said Wong. 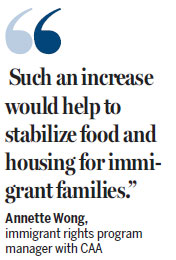 The proposal would invest $20 million to support the capacity and reach of qualified non-profits and legal service organizations to assist immigrant communities in applying for citizenship or deportation relief.

The immigrant rights groups argued that the state's investment in immigrant integration has the power to lift families out of poverty and increase their financial security.

The Fiscal Policy Institute predicted that immigrants who receive work authorization under the executive actions would experience a 5 percent to 10 percent increase in wages, on average. "Such an increase would help to stabilize food and housing for immigrant families," said Wong.

"While the injunction remains, we encourage immigrant communities to stay informed of immigration updates from credible community and government agencies and to be wary of and report any fraudulent services seeking to exploit prospective applicants," Wong said.