Making inroads to a place where time stands still

In Maku village, the men traditionally used crossbows to shoot animals, such as the flying squirrels that glide between the trees, but recently the locals have become less reliant on local wildlife for food.

Retired soldier, Mu Jiansheng, raises Derung cattle, famous for their high nutritional value. The animals are left alone in the wild for most of the year, except winter, with a few cakes of salt provided once a month. The township currently has 692 wild cattle, with each animal worth 8,000 to 10,000 yuan. Lacking funds to buy calves, Ma intends to raise his own cattle.

A lack of knowledge about crop planting and cultivation techniques meant that the Derung people don't eat vegetables during the winter. Li Fazheng, manager of Xingda Food Co in Gongshan, spotted a gap in the market and erected 18 greenhouses in Kongdang village, the site of the township government, and plans to teach the locals how to grow and care for crops.

However, most of the 16 locals Li Fazheng employed were, in his words, "awkward workers". He complained that they killed the seedlings by watering the leaves instead of the roots and when they painted a wall, they used their hands instead of brushes, ending up "covered in paint, like lacquer men".

An increasing number of young people are receiving some education, even though they have to traverse the mountains to attend the middle school in the county seat. Education has been a mixed blessing, though. The glimpses of the outside world have resulted in a number of younger villagers refusing to return home, according Li Yuhua, 24.

When Zhao Liming, a professor of Chinese at Tsinghua University in Beijing, wanted to conduct research into the famous facial tattoos in 2008, she hired Chen Yonghua, the village head of Xiongdang, as her guide.

Chen's younger brother graduated from a college in Kunming, but had not been seen in the village for two years. His absence weighed heavily on his mother, who questioned visitors and asked if they had seen her son.

Zhao promised to help. She uploaded a video of Chen's mother on the Internet and the missing son was located and reunited with his family less than a month afterward.

"As the local economy expands, the Derung are caught between tradition and modernity. It will take a long time for them to adapt to modern production methods and a non-traditional lifestyle," said Li Heng.

Guo Anfei and Xie Yong contributed to this story. 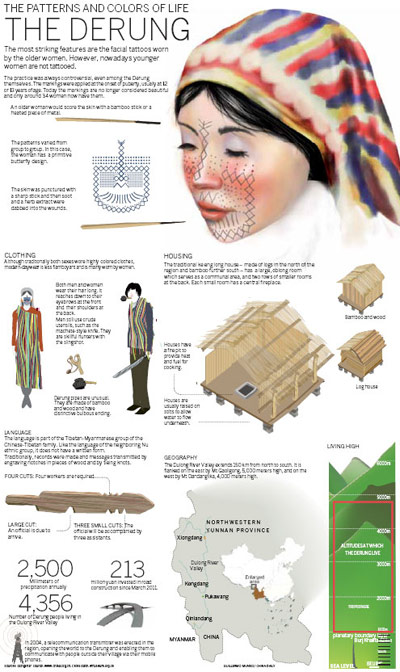 Birth rule could be relaxed