China's largest steel base, Hebei province, will cut 67.26 million metric tons of capacity by 2017 without putting too much emphasis on local growth in gross domestic product in order to create a sustainable development of the industry and improve air quality.

"We should not pursue economic growth under the current industrial structure because of its high energy use and environmental cost," said Zhou Benshun, secretary of the Communist Party of China Hebei Provincial Committee.

"It's time to make changes," he added.

Heavy industries such as iron and steel, cement and glass production have been pillars of Hebei's economy for years. However, the heavy pollution, especially lingering smog, means the province will face huge costs to improve the environment.

According to a plan released by the Hebei Development and Reform Commission, the province will close 21.5 million metric tons of steel capacity annually by 2017.

Hebei has the biggest steel output in the country, amounting to 180 million metric tons of crude steel in 2012, a quarter of the total output in China.

The reduction in overcapacity will affect Hebei government's tax revenue of 15.92 billion yuan ($2.62 billion) directly, according to Chen Yongjiu, head of the commission. 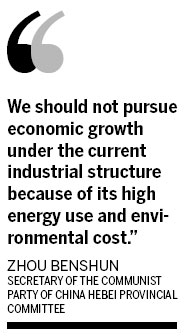 The province carried out tougher measures to meet the target assigned by the central government, which aims to reduce 80 million metric tons of steel production capacity within five years nationwide.

Hebei has proposed an even stricter requirement, saying that blast furnaces with capacities smaller than 450 cubic meters while converters smaller than 40 metric tons will face the same censure.

"About 75 percent of the steel companies are on the target list according to the national standards in Qian'an," said Zhang Shuyun, mayor of Qian'an city, a prefecture-level city under Tangshan. "However, to reach the target of the province, we have to raise our standards. In addition to administrative measures, the market-based measures are crucial. Companies that fail to reach the standards will be forced out of the market through economic measures."

The province will raise the cost of electricity and water in, making the companies that use more energy pay a higher price, according to a document released in November aiming to control the emissions of high-polluting industries including iron and steel.

According to the province's plan, Tangshan will cut 40 million metric tons of steel capacity by 2017.

"The steel mills have to be upgraded if the companies want to continue production. Otherwise, they will be eliminated from the industry," she said. "It is beneficial for the market in the long run but, at present, it won't have a big impact on the downstream market."

Chen, the head of the local commission, said the government is encouraging companies to explore their businesses in overseas markets.

"We will provide help to these companies, especially the ones which have to reduce their capacity but own high-quality equipment."

China's vaccines are safe: WHO

Chinese students in US buy luxury