China to pass US as top importer of electronics from Germany

China is about to dislodge the United States from another perch. This time, it's as the main recipient of German electric exports.

The survey result coincides with China's surpassing the US as the world's largest merchandise trader, according to data cited by the Ministry of Commerce.

Data from the US Commerce Department showed that the US' combined exports and imports stood at $3.91 trillion in 2013, about $250 billion less than China's.

The latest milestone in the electrical field caps off a decade-long climb for Chinese imports from Germany, a period when China's economy was growing at a double-digit clip, compared with its approximately 7.5 percent rate today. 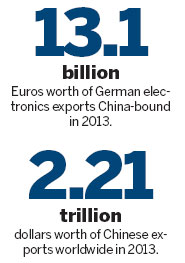 "German electrical exports to China quadrupled from 2001 to 2011," according to an article on the Germany electrical and electronic manufacturers' website.

Improved coordination between European electrical suppliers and China in the past seven years on technical legislation and standards has contributed to the rise in exports to the Asian nation from Germany, according to the website.

"An extensive network has been built up between the member companies and the Chinese ministries, authorities and organizations," according to the website. EuropElectro - the voice of the European electrical and electronics industry in China under the leadership of the German electrical and electronic manufacturers' group - "is equally recognized and acknowledged today by the Chinese authorities and is appreciated as a technical adviser," according to the website. EuropElectro provides the Chinese organizations with "reliable information on market access conditions in Europe," the website said. The group's central location in Beijing, just 30 minutes from a major airport, also helps to keep the goods flowing into China, according to the website.

In 2004, the dominant export market for the German electric goods sector was France, leading the UK and the US, according to the survey.

Germany, with the world's fourth largest economy, and Europe's largest, typically does most of its export business with France, which has a 9.4 percent share. The US is second at 6.8 percent, and China sixth at 5.7 percent.

China, with $334 billion in exports, is the biggest exporter to the US, according to US Census Bureau data. Canada is the second largest US exporter, at $252 billion.

US first lady to visit China