A shortage of qualified managers is the fastest-growing area of risk confronting US companies' Chinese operations, according to a survey.

The concern has arisen even though many of the companies say they have been doing profitable business in China.

One of the largest factors in the managerial shortage is the country's air pollution.

The latest survey by the American Chamber of Commerce in China, released on Wednesday, shows that the proportion of companies reporting that air quality is an obstacle to recruiting and retaining senior executives rose to nearly half.

In its 2014 Business Climate Survey, conducted by AmCham China with 365 of its members in November and December, 36 percent of the respondents, compared with 30 percent last year, viewed the shortage of qualified managers as a risk to their Chinese operations.

The lack of talent represented the most significant rise among all the risk factors in the survey.

Forty-eight percent of the companies in this year's survey, compared with 34 percent last year, said that poor air quality is an obstacle to recruiting and retaining senior executives.

"The air quality concerns may be an increasingly important factor," the report said.

"Finding and keeping employees, particularly managers, is a major challenge for foreign companies. This leads to an inevitable growth in labor costs, (which is) not only a major risk to companies' operations, but also to the competitiveness of China as a whole."

More than 80 percent of the companies feel that China is losing its competitive advantages to varying degrees due to rising costs.

However, more firms were scaling back expansion plans in China, and the majority plan to moderately increase investment in the country by 10 percent or less this year, the report said.

More than 80 percent said the quality of China's investment environment is improving or has remained the same, while less than 20 percent said it is deteriorating.

Some 75 percent of the firms surveyed are optimistic or slightly optimistic about their business outlook in China for the next two years, according to the survey report.

Greg Gilligan, chairman of AmCham China, said in the report, "While this year's Business Climate Survey lays bare the difficulties faced by foreign business in China, it also demonstrates optimism that the transition apparent in 2013 is just the beginning of a new era in China's development.

"Many tough decisions remain for the country, but the most difficult decision, to embrace reform, has already been made."

In 2013, China set up the China (Shanghai) Free Trade Pilot Zone. Late last year, the country also unveiled a comprehensive reform plan to transform the economic growth model while pledging to allow the market to play a decisive role in allocating resources. 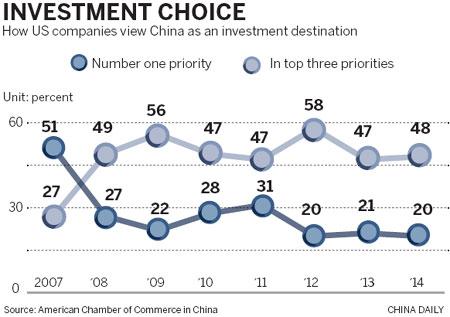 Quality is king in mobile games' race to the top

China largest holder of US debt