Preparation pays off in quake aftermath

Chile finds that innovation in building and communication systems helpful

When Tuesday's earthquake struck Chile - one of the world's most quake-prone countries - the nation's preparations helped to keep damage to a minimum, a senior embassy official said in Beijing.

"Considering the magnitude and risks of tsunami, the damage to property and casualties have been relatively small so far," said Ramiro Riobo, minister counselor at the Chilean embassy.

At least five people were killed when the magnitude-8.2 quake hit northern Chile's Pacific coast at 8:46 pm local time on Tuesday. Tsunami waves more than 2 meters high lashed the coast in the hours immediately after.

Riobo, Chile's highest level diplomatic envoy in China after the outgoing ambassador returned home, said Chileans were "mentally prepared" for such events, especially after a magnitude-8.8 quake and tsunami struck central Chile and caused the deaths of more than 500 people in 2010.

Large-scale emergency drills to deal with quakes have been held about twice a year and special access roads have been built to enable people to get to the higher ground, he said.

Emergency services were able to carry out relief efforts in an efficient manner as the public was orderly and calm.

It was also fortunate that the quake hit when many families were still up and workplaces and schools closed, he said.

Chile has embarked on special construction projects and has insisted on introducing innovations that allow buildings to better absorb shockwaves.

Chilean authorities also introduced a comprehensive message-alert system in 2011 that allows officials to send out mass alerts simultaneously to computers, pagers and cellphones, as well as radio and television.

Messages are meant to reach millions within seconds - even if all networks are busy.

Though the death toll has been relatively small, thousands of people have been forced to leave their homes and aftershocks are possible. 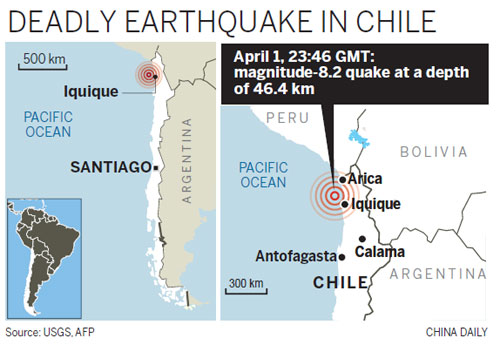