There is no scientific evidence that dog and cat treats made in China have caused a rash of pet illnesses in the United States, according to a Chinese government official.

Lu Chunming, a spokesman for the General Administration of Quality Supervision, Inspection and Quarantine (AQSIQ), said on Monday that any link between health issues in the US and the pet products produced in China were "lacking scientific grounds".

Lu said that pet treats coming to the US from China have been produced in strict accordance with US standards. He also said that the US authorities have so far not been able to provide a concrete reason for the illnesses.

As of May 1, the Food and Drug Administration (FDA) had received close to 5,000 complaints of pet illnesses and more than 1,000 reports of canine deaths following the consumption of Chinese-made jerky treats, according to FDA data. Complaints about the China-made pet treats have been continually filed by consumers with the FDA since 2007.

Jennifer Dooren, an FDA press, wrote in an emailed statement to China Daily on Monday that the FDA "continues to investigate" issues relating to jerky treats for pets. But "it remains unclear which specific ingredients or finished products, if any, may be responsible for causing illnesses in pets".

Most of the animal illnesses have involved chicken jerky, but other products in question include jerky wrapped around dried fruits, according to the FDA. 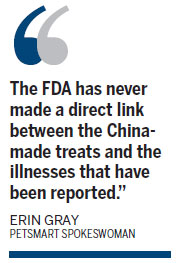 The FDA has collaborated with the Centers for Disease Control and Prevention (CDC) and laboratories across the country to investigate the causes of the illnesses.

Petco, a leading pet supplies retailer, announced on May 20, that it would stop carrying China-made dog and cat treats at all nationwide locations by the end of 2014.

Erin Gray, a PetSmart spokeswoman, wrote in a Monday email to China Daily that the removal project is "moving along as planned."

"The FDA has never made a direct link between the China-made treats and the illnesses that have been reported," Gray said. "However, we feel removing the treats from our shelves is the right things to do for pets and our customers."

"By March 2015, PetSmart will no longer sell dog and cat treats manufactured in China," she said.

Jim Myers, Petco's CEO, said the decision to remove Chinese-made products from the company's stores is in the business' "best interest".

"We've been following the FDA warnings and related customer concerns closely," Myers said in a May 20 company statement. "We know the FDA hasn't yet identified a direct cause for the reported illnesses, but we decided the uncertainty of the situation outweighs the lack of actual proof."

"We know some pet parents are wary of dog and cat treats made in China, and we've heard their concerns," Myers said. "As a leader in the industry we're eager to make this transition and to expand our assortment of safe and healthy treats, the majority of which are made right here in the US."

Petco Animal Supplies Inc, founded in 1965, is a privately owned pet retailer that sells pet-oriented products and services, including grooming and training amenities.

With its headquarters in San Diego, the company oversees a network of more than 1,200 stores and close to 25,000 employees, including locations in Mexico and Puerto Rico.

Phoenix-based PetSmart, the other major US-based pet retailer, controls close to 1,300 stores and employs about 52,000 associates, per company data.