US 'wants China's to succeed in its reforms'

Imagine that a crew of riverboat has been navigating in relatively calm water for 30 years, but now it is moving towards rapids with risks and challenges from both inside and outside the vessel. People ask: Are they going to reach the other side?

The metaphor was brought up by Matthew Goodman, William E. Simon Chair in political economy at the Center for Strategic and International Studies (CSIS) in Washington. He nicknamed the project on economic decision-making in China "the navigator" during Tuesday's multimedia presentation China's Economic Policymaking at a Time of Transition.

The event marked the halfway point of a two-year-long project on economic decision-making in China. The presentation was followed by a conversation betweenHenry M. Paulson Jr, 74th secretary of the Treasury and chairman of the Paulson Institute, and David Wessel, director ofHutchins Center on Fiscal and Monetary Policy at the Brookings Institution.

"China has clearly entered a period of slower growth, and risks and challenges for policymakers have increased. This presentation is all about whether this group of policymakers has or still has the right stuff to manage this transition to a new model of economic growth and development," said Goodman. 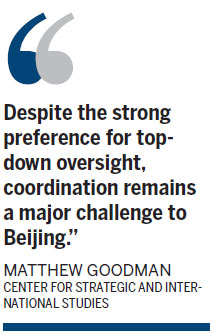 According to the panel, China's economy has grown rapidly for 30 years due to a combination of smart politics and favorable economics. Nearly unlimited supply, inexpensive labor, high saving rate, massive investment, large growing export markets and the pursuit of rapid economic growth contributed to the economic boom as well.

Now, however, these advantages are gone. China faces the middle-income trap.

According to Reuters, China's full-year growth in 2013 was 7.7 percent, slightly above market expectations of 7.6 percent. As the world's second largest economy, China is facing both risks and challenges.

"Despite the strong preference for top-down oversight, coordination remains a major challenge to Beijing," Goodman added.

Government ministries have been streamlined with 100 in 1982 in contrast to today's number of fewer than 50. Drawbacks exist, such as the jurisdictional overlap and the gap between the center and localities, according to the panel.

Decentralization has filled unproductively over investment and massive buildup of local debts, he explained.

The panel acknowledged China's inevitable difficulty. As they said that the size and complexity of China's economy and its interdependence with global economy makes managing external dynamics far more complicated.

The panel said that Chinese leaders have to balance multiple objectives in addition to GDP growth, for example, clean air, safe food and clean governance.

Henry Paulson said: "We want China to succeed in reforms." He believed that Chinese people care about corruption, clean air, clean water and food security and believed with no doubt that they are "serious about curbing corruption".

US Treasury declines to name China as currency manipulator

Internet recruiter aims for base of millions

China sells more of its US debt in February: Treasury

Tesla in search of deal with Sinopec