By MAY ZHOU in Houston(China Daily USA) 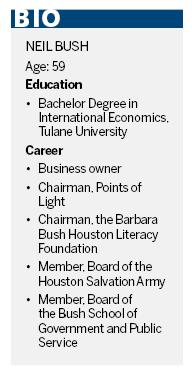 In the US, there are many business people who are heavily involved in doing business with China. Neil Bush, son and brother to two former US presidents, is one of them.

Yet, unlike other business people, his family name lends intangible weight to his endeavors, taking them beyond mere commerce.

"I just got back from Beijing, see, I haven't unpacked my suitcase yet," Bush said, opening his suitcase on the floor of his Houston office to reveal an assortment of Chinese style boxes.

Bush was just back from attending a celebration of the 60th anniversary of the Chinese People's Association for Friendship with Foreign Countries. "It's a big event, President Xi Jinping came to make a speech," said Bush.

Bush's first contact with China was in 1975 when his father was the US' chief liaison officer in Beijing. He rode a bicycle like the locals to explore Beijing.

"I saw people on rusty old bikes looking longingly at shiny new bikes in store display windows," he recalled. "I could tell they very much wanted to own a new bike. It's remarkable to see that."

Bush went to China again in 1981 on his own. "I brought a team of oil and gas experts to look at some potential deals, but it didn't work out," he said.

Bush kept going to China, linking US business people with their Chinese counterparts during the '90s. Projects such as the mall in Shanghai's Pudong area and Ford Motor's parts business materialized thanks to his help.

Over the past 15 years, Bush has been focusing on developing his own businesses in both China and the Middle East. He now has various interests in Singapore, Hong Kong and China involving oil and gas exploration and exploitation, real estate development and property management. He has a permanent office at the Presidential Beijing, a hotel owned by one of his companies.

By his own account, Bush has been to China more than 100 times and visited more than 30 cities there, but he admits he has lost count.

In the last three years alone, Bush has made more than 30 trips to China. "I am going there more frequently in recent years because of my business interests," he said. "Business keeps luring me back to China."

Business aside, Bush is not afraid to admit that he has a personal interest in promoting his father's legacy. "My father is very vocal about the importance of the ties and cooperation between the US and China," he said. "I want to use the good name of my father George Bush to build a better relationship between the US and China. There are so many misunderstandings and there is a lot to do."

To that end, Bush has been actively involved in the biennial China-US Relations Conference initiated by his father and former president George W. H. Bush in 2003 to continue his vision and legacy of establishing better understanding, closer ties, and important collaborations between China and the US in the 21st Century.

The Conference, co-hosted by Texas A&M University, the George Bush School of Government and Public Service, the George Bush Presidential Library Foundation and the Chinese People's Association for Friendship with Foreign Countries, has been alternatively held in the US and China over the past decade.

Bush is currently actively involved in planning the sixth biennial China-U.S. Relations Conference to be held in China in the fall of this year. The topic is global infectious disease. "We want to bring together experts on infectious diseases from around the world," Bush said. "So that when such things happen, we can fight together."

Bush is often invited to speak while in China. In 2011, he opened a Sina Weibo micro-blogging account and now has more than 130,000 followers.

Bush views himself as a self-appointed ambassador of good will to China. "I feel like a rebel in fighting all the negative views of China in the US. A lot of people harbor a negative or cautious view of China. People fear China as a military foe. However, in 2,500 years of history, China has been a super power more than once yet never once used that power to conquer others."

Bush thinks that kind of fear is a projection of people's not very positive view of the Chinese Community Party (CCP). "But in reality CCP is no longer the CCP of Mao's era but a socialist economic entitlement, a lot of people just don't get that," Bush said.

"Since I visited China in 1975, more freedom has been granted to more people than ever before in this country," Bush said. "We should celebrate and embrace this and use it as a platform to build an even better future for both China and the US."

As a frequent traveler to China, Bush says he knows its pulse. "I think the biggest challenge is that today in China many young people want China to be like the US, to have the living standard and freedom like the US. That would require China to leap from an underdeveloped nation to a developed nation in one step. That's just not possible," he said.

In late 2012, Bush posted a photo of himself sporting a Mao-era military hat, shoulder bag, and a popular travel souvenir mug being sold all over Beijing at the time on his Weibo account and jokingly wrote: "I'm thinking of joining the CCP. What do you think of my accessories?"

While some merely laughed at his joke, others made negative and angry comments. Bush thought this was a reflection of people's anxiety and desire for rapid change. He seemed worried about such sentiment. "If people are not patient and want radical change, it could set China back in a way to harm a lot of people. I advocate more freedom based on stability," he said.