Central Asian countries welcome China's role in creating a "new Silk Road" to promote economic activity in their region, a panel of ambassadors and foreign ministers from the area said Tuesday.

"Central Asia is the largest landlocked region in the world, therefore, it is always a great challenge to make sure that we are well-connected to global markets in all directions," Erlan Idrissov, foreign minister of Kazakhstan, said. "When President Xi Jinping visited Kazakhstan last year to announce China's new Central Asian policies, the core of that policy was building the economic belt for the Silk Road."

"The countries of the region [would be] the first to benefit, but connectivity has an important political connotation for that part of the world," Idrissov said. "These projects, when fully implemented, will open up additional markets for our goods, boost our economic growth and create opportunities for all the countries along these routes."

Aizaz Chaudhry, foreign secretary of Pakistan, said that cooperation among the nations in and around Central Asia is vital for the entire region.

"We'd like to see healthy competition in Asia so that both the US and China [can] work in a way that enhances the vision for this region," Chaudhry said during the event.

Chaudhry and Idrissov, made their comments during a program at the Asia Society headquarters in New York. They were joined by several Central Asian diplomats for a panel discussion titled, Expanding Economic Connectivity in Greater Central Asia.

The panel, moderated by Josette Sheeran, Asia Society's president and CEO, touched on a variety of topics, including ways to build shared infrastructure for cross-country railways and energy pipelines. 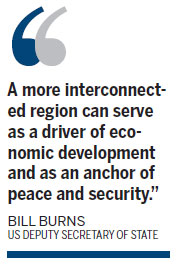 Burns said the economic development of greater Central Asia will be welcomed as other economies in the region begin to put a focus on creating a network of connectivity that will increase economic benefits for all.

"Whether you call it 'The New Silk Road,' or the 'Silk Road Economic Belt,' now is the moment to work together to restore this region to its historic role as a vital hub of global commerce," Burns said. "This region is critical to global security and full of economic opportunity and human potential."

"A more interconnected region can serve as a driver of economic development and as an anchor of peace and security," Burns said. "To realize that vision we will continue to support efforts on four specific tasks: building a regional energy market, facilitating trade and transport, easing customs and border procedures, and promoting people-to-people ties."

Xi, who proposed the Silk Road Economic Belt initiative in his visit to Central Asia last year, has urged a number of countries including India and Pakistan to join the Shanghai Cooperation Organization (SCO), which works to bolster the economic and political well-being of a number of Eurasian countries.

Idrissov, of Kazakhstan, said: "Governance is key, but connectivity is not done for its own sake, rather for the sake of development. We believe the US, China, Russia, should come together to create a win-win platform in Central Asia."

Biswal, with the US State Department, said New Silk Road connectivity is "not so much a vision, but more so an anticipation of what is happening" already in the region.

"Less than 6 percent of trade in Central Asia happens in the region, and these are some big economies," Biswal said. "Asian economies are increasingly going to be the growth engines of the economy."

'The ticket changed my destiny'

iPhone 6 goes on sale in Taiwan