Trending: Residents lay their money out to dry

Newlyweds put out tables for their ex-boyfriends and ex-girlfriends, Jackie Chan pleads with media to spare wife, and residents lay their money out to dry. 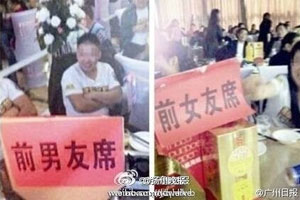 Ex may not be the best wedding guest

A wedding banquet held on Oct 22, in Xiangyang, Hubei province, captured internet attention when the newlyweds put out tables for their ex-boyfriends and ex-girlfriends, Chutian metropolis daily reported.

The addition of the exes to the ceremony was the idea of the groom's friends. Luckily for the newlyweds, the exes were fakes. 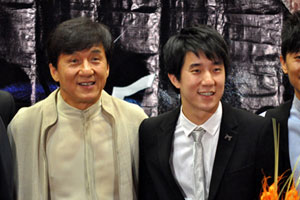 Jackie Chan pleaded with media not to hurt his wife's feelings by spreading rumors about their son when he appeared in public for the first time on Thursday since his son Jaycee Chan was arrested on a charge of drug use, Information Times reported.

At a news conference for a new movie Skiptrace, in which he stars, the elder Chan told the media that he knows little about the current situation of his son, who was arrested on a charge of taking drugs two months ago.

Two workers hired by a plantation in Hunchun, Jilin province to catch frogs in a forest were so terrified after sighting tigers twice this month that they quit even though the boss promised to give them pay raises, New Culture Daily reported.

On October 11, Hu Peng and Wang Zhiying saw two tigers in the forest and said they tumbled many times when running away. They said they encountered three tigers six days later.

A new face recognition system can identify people by comparing an instantly taken image with their ID photo in one-tenth of a second. The system made its debut on Thursday, Chongqing Economic Times reported.

It analyzes a new image and the matching ID photo after eliminating the interference of such external factors as lighting, age, ID photo angle and resolution.

The system is over 93 percent accurate, so far the highest rate in the world, said Zhou Xi, a researcher at Chongqing Institute of Green and Intelligent Technology, which developed the system. It has been used at the Shanghai Museum and at railway stations in Beijing, Chengdu and Harbin. Residents lay their money out to dry

A 70-year-old woman named Na Ge lays out rows of 100-yuan notes in the sunlight in her yard in Bangpen,Yunnan province, Huashang Daily reported on Friday.

Na Ge said villagers like her used to be too poor to afford a full meal. They have become rich since the local Pu'er tea became popular in recent years.

Villagers would rather keep the money at home than deposit it in the bank. They dry the money on sunny days after it becomes moist from humidity on rainy days.

China to provide the 4th batch of assistance to fight ebola

Accord reached on Asia infrastructure bank