This new Kung Fu Panda will be fluent in Mandarin.

There will be two versions of the movie Kung Fu Panda 3 (set for release in the US and China on Friday) - one in English with voice acting from American stars and one in Mandarin.

And the Mandarin version will not simply be dubbed in Chinese over the English version.

Jeffrey Katzenberg, CEO of DreamWorks, said that the movie was completely reanimated to make sure the characters' expressions and mouths matched the Mandarin being spoken in the film, and the film contains an entirely different script with references to Chinese food and culture, according to The Wall Street Journal.

"The use of two versions will likely become standard for similar films, with one version just for the China market; the market is now that important to justify the extra dubbing expense with Chinese actors, so I think that will have an impact," said Stan Rosen, a professor and director of the East Asian Studies Center at the University of Southern California.

Aynne Kokas, media professor at the University of Virginia, said that the Mandarin version "really shows an effect" from Oriental DreamWorks to localize content for the Chinese market, which audiences will take to.

Besides the local flavor, the film will be the first major project from the Oriental DreamWorks joint venture, and movie industry analysts expect a box office bonanza in China. 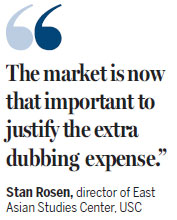 The film was shown during a three-hour preview on Jan 23 and earned $6.5 million in China. It managed to secure a coveted day-and-date release for the North American and Chinese markets. The movie is also hitting screens just before the Lunar New Year (Feb 8) begins in China, which industry watchers said should help its box office performance.

"Kung Fu Panda 3 is going to do great in China," said Marc Ganis, president and co-founder of Jiaflix, a company that helps distribute American movies in China.

"The reasons are simple: It's a known product. It's a name that's tied in with China, and it's done well previously in China. It's going to hit all three of the major [film] formats," he said. "It's also not just a matter of the publicity you give it, but whether the Chinese people are interested in the content as well, and they're very interested in this content."

"I anticipate a huge box office for Kung Fu Panda 3. The first two films did extremely well, and this one has an even wider rollout, as well as stronger domestic partnership," said Kokas.

The film tells the story of a kung fu-fighting panda named Po, who in the third installment will meet his biological father. The character Po is voiced by American actor Jack Black, and Po's father will be voiced by Bryan Cranston, known for his work in the TV series Breaking Bad. Po's gang of animal friends are voiced by Jackie Chen, Angelina Jolie, Lucy Liu, Seth Rogen and David Cross.