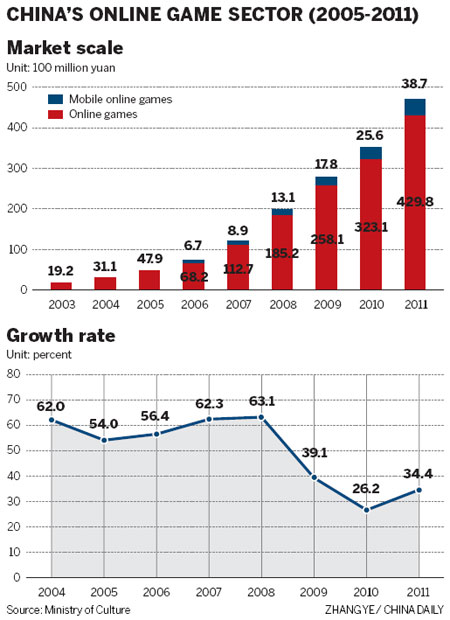 China's online gaming industry is recovering from a slump that started in 2010, and its market scale is expected to exceed 100 billion yuan ($15.9 billion) by the end of 2015, the Ministry of Culture said on Friday.

The market scale reached 46.85 billion yuan ($7.4 billion) by the end of 2011, a 34.4 percent increase year-on-year, according to the ministry, the industry's regulatory body.

"The market revived last year as its total revenue continued to expand and exports increased," said the ministry.

The industry's growth rate is expected to be between 20 and 25 percent over the next three years, which means the market scale could reach 82.6 billion yuan by 2014, Analysys International estimated earlier this year.

Chinese developers exported 92 new online games in the past year, which brought the total number of exported games to more than 150, according to the ministry.

Starting from 2010, the nation's leading online game developers, such as Shanda Games, The9 Ltd and Giant Interactive Group Inc, have announced their own overseas strategies for their online gaming businesses. Major overseas markets include South Korea and Vietnam.

In November, Alan Qunzhao Tan, chairman and CEO of Shanda Games, announced that he plans to lift the company's overseas revenues from about 5 percent in 2011 to 20 percent over the next three years, Sina.com reported.

The industry is also attracting investors. Kai-Fu Lee, founder of the tech incubator Innovation Works, said that he is likely to invest in more online game projects as the sector is "developing very fast".

"The development of the industry is being driven by the emergence of new types of games, such as browser and mobile games," said Sun Shoushan, deputy director of the General Administration of Press and Publication. The GAPP is another supervisor of the country's online gaming industry.

Browser games, which run on Internet browsers, are expected to be the industry's driving force in the years to come.

Sun Mengzi, an analyst from Analysys International, estimated that revenue from browser games, around 5 billion yuan last year, could easily double by 2013.

Data released on Friday by the Ministry of Culture showed that the revenue of the nation's mobile game developers hit 3.87 billion yuan in 2011, up more than 50 percent year-on-year.

The mobile gaming sector's revenue is expected to reach 10 billion yuan by 2014, which will drive up its market share to more than 17 percent, said Sun from Analysys International.

In addition, the ministry pledged to complete drawing up regulations on the mobile gaming sector in an effort to help develop the fledgling sector.

"As the market share of the Symbian operating system continues to drop, future mobile games will be gathered on Apple's iOS and the Android systems. This means that developers will be able to develop games at a faster speed and lower costs," the ministry said, adding that regulations should be implemented to pave the way for the mobile gaming sector's healthy development.