Exchange launched in China to ensure supplies and good value

An iron ore trading platform made its China debut on Tuesday as the world's biggest buyer of the commodity sought to enhance its price-setting influence.

Trading volume is expected to reach approximately 100 million tons by the end of this year. This will account for about 14 percent of China's annual iron ore imports, said Xu Xu, chairman of the China Chamber of Commerce of Metals, Minerals & Chemicals Importers & Exporters, one of the organizers of the platform.

Just a few minutes after its official launch, the platform saw its first transaction with 165,000 tons sold for $145 a ton, including freight. This was in line with market expectations, analysts said.

The platform will not only help ensure supplies for China but will also benefit global ore trading, Su Bo, vice-minister of industry and information technology, said.

Nearly all ore sold to China is based on spot prices, with the industry evolving over the past two years after four decades of pre-set annual contracts.

China, with a leading role in the market, has long argued that it should have a greater say in pricing.

The platform helps it wrest some control from top miners such as Vale, Rio Tinto and BHP Billiton.

Zhang Lin, senior researcher of Lange Steel Information Research Center, forecast that the platform will come into its own when it can attract about half of China's imports.

Top international mining conglomerates, along with major Chinese steel producers including Baosteel, Hebei Steel and Wuhan Steel, have all signed up as members of the electronic platform operated by China Beijing International Mining Exchange.

As the world's biggest ore importer, China accounts for about 60 percent of the global market.

The platform has been undergoing test runs since the beginning of the year.

"On the face of it, it is a recipe for success," said Rory MacDonald, broker at Freight Investor Services. "But the system must stand up and the system must be seen to perform."

The exchange said the platform will offer contracts settled in US dollars and yuan. Cargoes that can be traded include those sitting at bonded warehouses, being transported at sea or stacked in domestic ports as well as futures, ore that has yet to be mined.

The exchange will charge a commission fee for both buyers and sellers of 0.125 yuan or $0.02 per ton.

Various grades as well as lumps, are tradable, with iron content ranging from 52 percent to 67 percent. Pellet and concentrate can also be sold.

The exchange has said banks and financial firms would not be allowed to participate in a bid to stem speculation, and there will be no trading of derivatives.

Currently, trading in the spot market for seaborne cargoes is done directly between buyer and seller. Global miners e-mail or fax prospective buyers whenever they sell cargoes via spot tenders, a system deemed efficient and free of broking fees.

Traders say unless China offers incentives, such as tax rebates or commission discounts, they are unlikely to migrate to the platform anytime soon.

The platform has more than 150 companies as members so far.

Angang Steel, which is a member of the platform, will put up to 30 percent of the company's iron ore for trade on the platform, said Li Daguang, deputy general manager of Angang Group International Trade Corp.

"It is still too early to predict how much iron ore we will put into the platform for trade," said Luiz Meriz, president of Vale Minerals China Co Ltd.

"However, it has created a new way to look at ore prices, which is the key point of the platform and we are very happy to see that."

"We believe the new system will bring more transparency because prices are not created by the platform, but reflect real transactions," he said. "So, we are very supportive."

The China Iron and Steel Association has blamed "monopoly practices" by foreign miners for the surge in costs, and sees the new platform as a way to keep costs lower.

"The widely used Platts iron ore index is regarded with some skepticism as to its transparency and fairness by steel companies and iron ore traders from China, Japan and South Korea," Wang Xiaoqi, association vice-chairman, said.

He said the new platform will not allow financial organizations and banks to participate to avoid the speculation and will not trade iron ore derivatives either.

The platform will also rival the planned GlobalOre trading exchange which is backed by BHP Billiton and has offices in Singapore and London.

But some traders said market size gives China an edge.

"This platform is supported by the Chinese government," a Shanghai trader said.

With growth in Chinese demand for iron ore this year slowing, along with the overall economy, the pricing dynamic is changing to China's advantage.

"The supply and demand balance will change over the next few years and should see Chinese mills in a much stronger position whereas the last few years have very much been a sellers' market," said Christopher Ellis, a Metal Bulletin analyst.

Reuters contributed to this story. 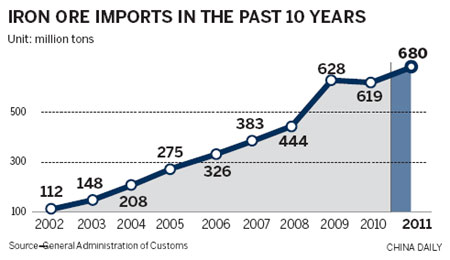